I An unexpectedly costly bike overnight. i

This unseasonably warm November left me with no choice but to try to fit in one last (?) quick weekend bike overnight. The plan: Amtrak to Mendota, IL, a short ride over country roads to the western end of the I&M Canal State Trail, then along the trail, camping overnight and finishing up at its eastern end in Joliet, where I could catch Metra commuter rail back to Chicago—hopefully in time to make my 6:00 pm bike maintenance class at The Recyclery.

I caught the 381 Carl Sandburg at 7:35 Saturday morning at Union Station and arrived in the very pleasant little town of Mendota a little after 9:00. A quick stop for coffee and then I headed south through open farmland to Peru, Illinois, about 16 miles away; there was a strong west crosswind but it would soon be a tailwind when I turned east at Peru. The Mendota-to-Peru route was not quite as flat as I’d been expecting, but it was manageable. 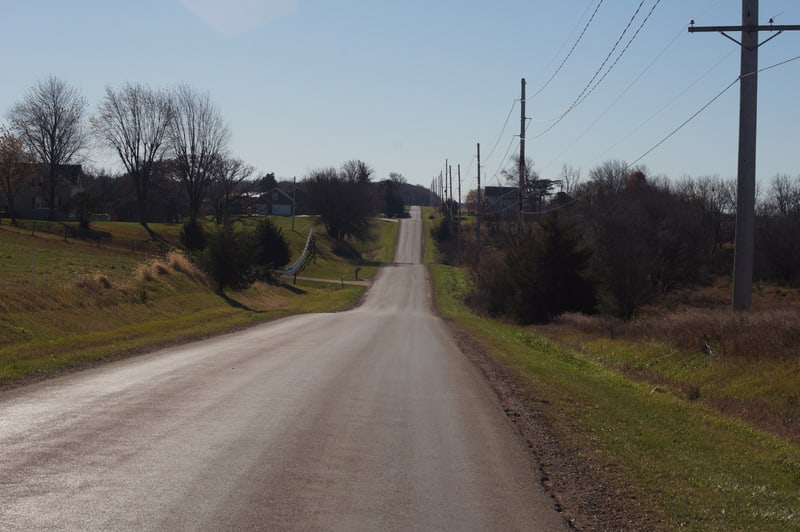 In Peru (or maybe neighboring LaSalle; I’m not quite sure) I had a taco dinner for late breakfast and managed to find the trail entrance at Lock 14 after a few false starts. 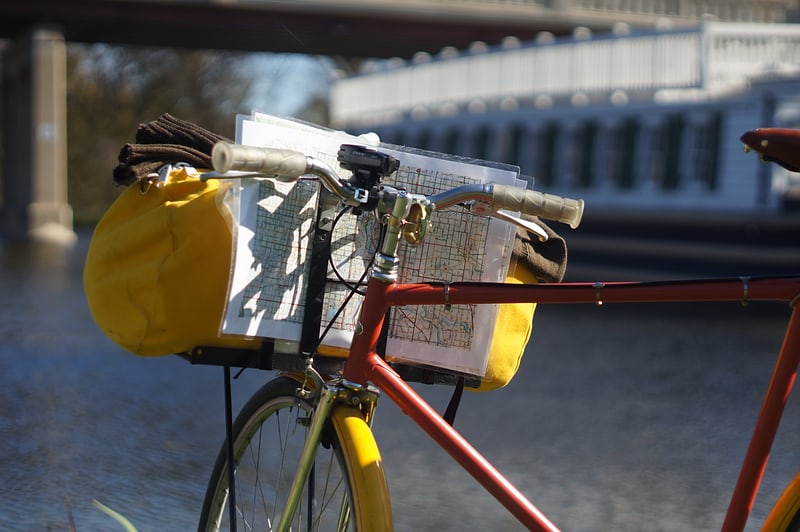 There was a very cool replica of a canal boat tied up here; unfortunately you don’t seem to be able to go aboard. 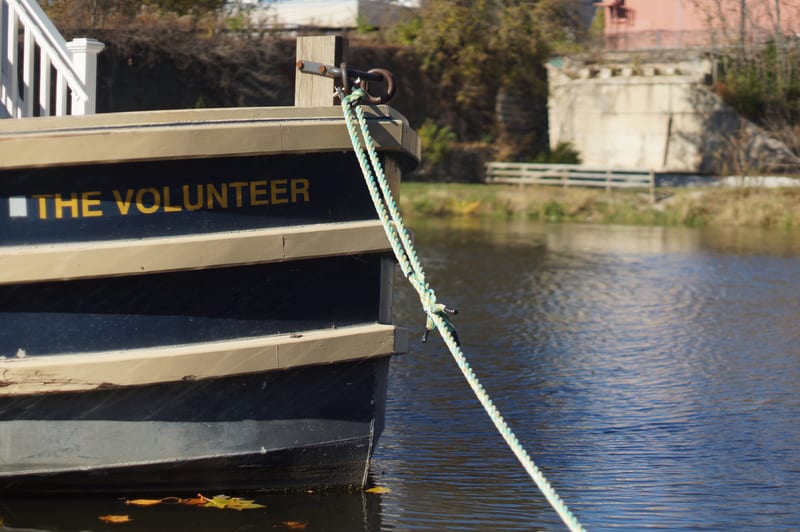 Just after Utica, an enormous pothole snuck up on me and I got a pinch flat. I had an audience while I patched it: 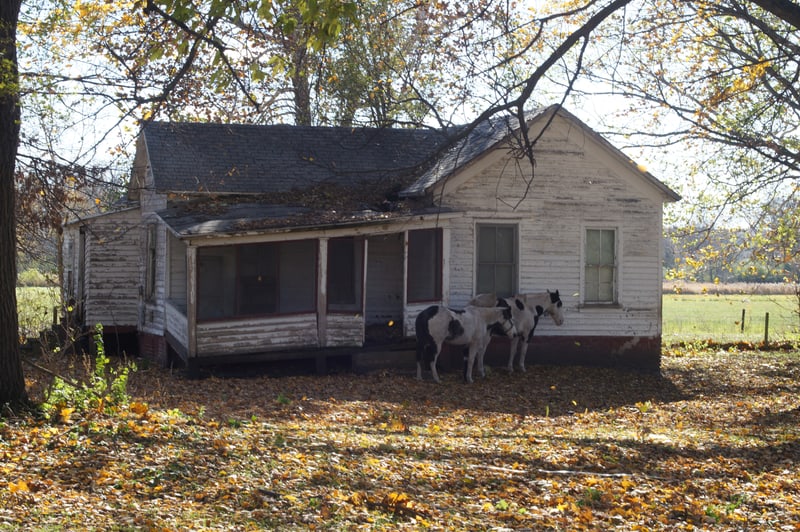 When I’d called the ranger station while planning the trip I’d been warned that part of the trail here was washed out, but I hadn’t really grasped what this entailed. 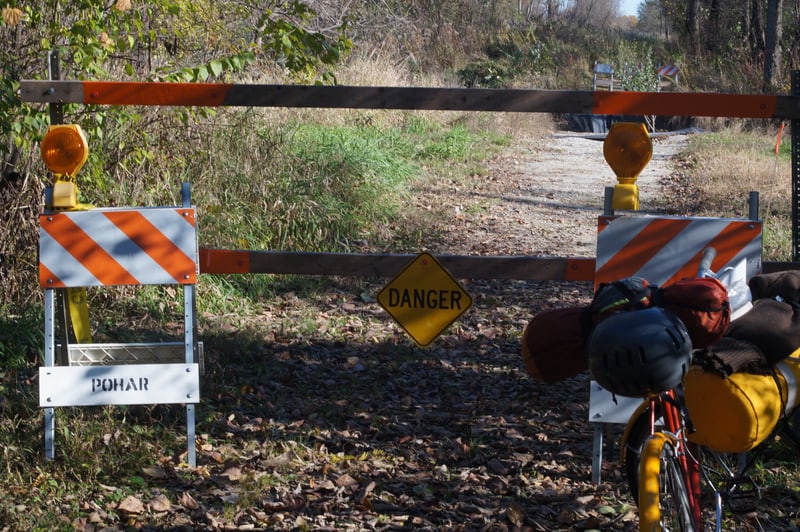 I took one board and the bike took the other, with no mishaps. 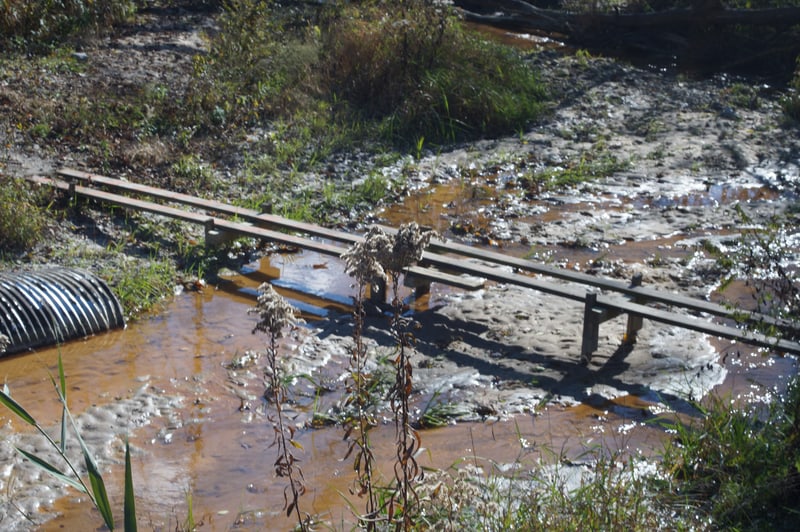 At Ottawa I made a quick stop at The Bike Shop for some tire levers.

After Ottawa there are numerous railroad crossings, but this was the only one that had a train parked next to it. (Out of frame to the right a locomotive was moving around on a siding making me nervous.) 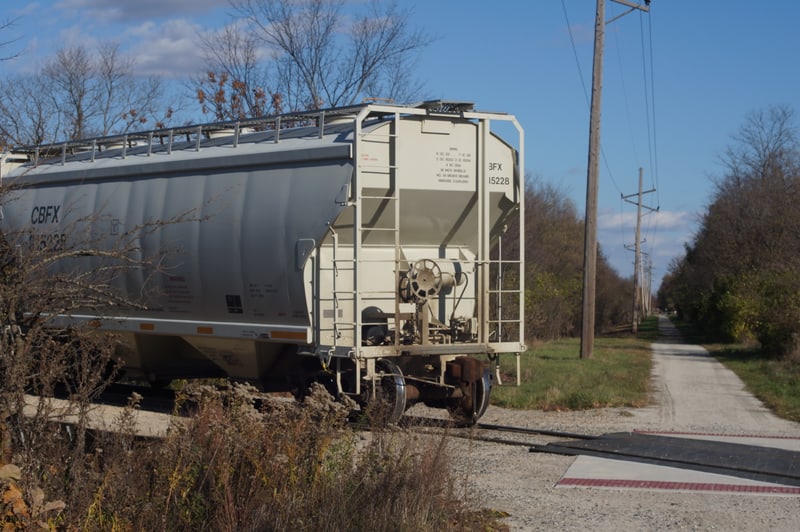 Shortly after this, I noticed that my glasses were missing. (I’d been wearing my sunglasses, and had my glasses tucked in a shirt pocket.) I backtracked to the bike shop and to a gas station in Ottawa where I’d bought some water and trail mix, but there was no sign of them at either place or along the trail. As long as the sun was up I could wear my sunglasses and see well enough, but the sun was already starting to get low, and I was hoping to avoid setting up camp in the dark. 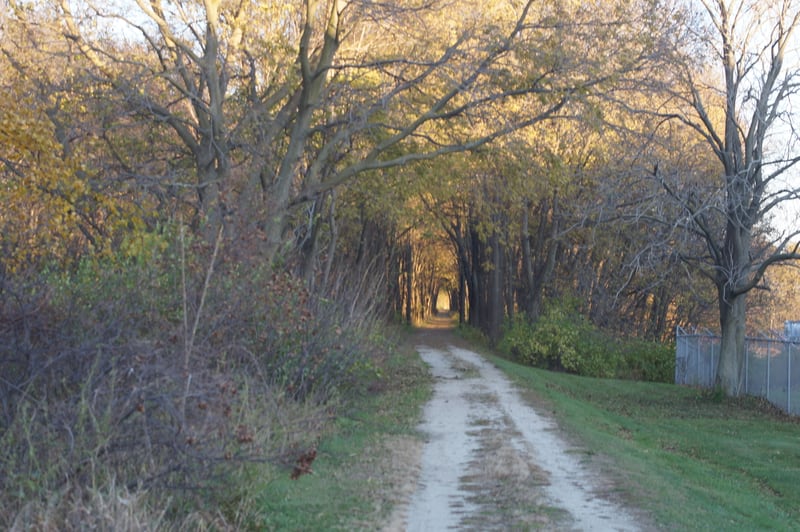 I almost made it, but just as I got to Gebhard Woods State Park it grew dark. There were no staff present and I spent a little time wandering around trying to figure out where the campsites were, but eventually got the tent set up and then rode into town for dinner and more water (the water at the campground had been shut off for the season). I was asleep before 9:00.

In the morning, fortified by tea at camp (loose leaf, of course—just because we’re camping doesn’t mean we’ve got to live like animals) followed by eggs, bacon, hashbrowns, and french toast in nearby Morris, I felt much better despite the lost glasses, and re-joined the trail. 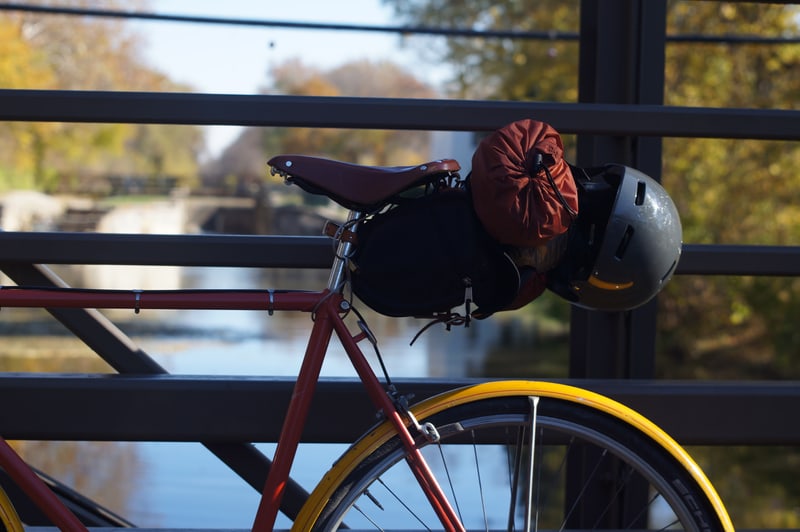 Lock #8 at Aux Sable, with the locktender’s house: 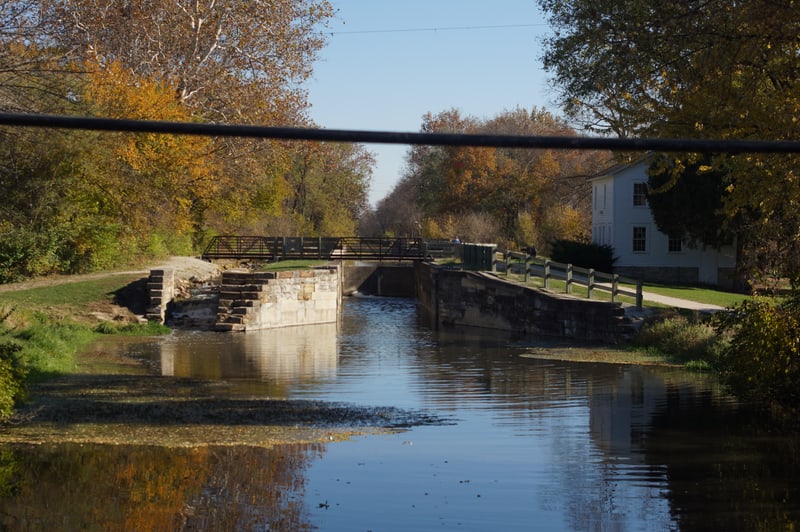 In places the canal was so thickly blanketed with algae that you could hardly tell you were looking at a body of water: 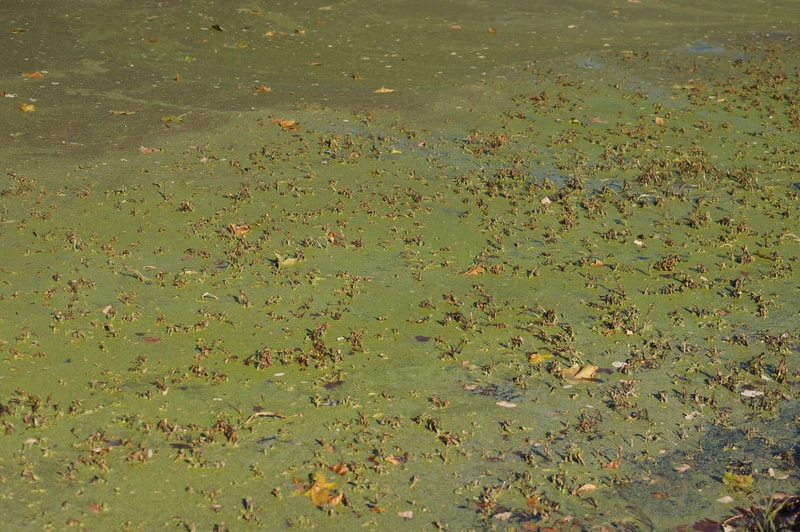 In other places it was as clear as glass; here you can see the reflection of the 1830s barn where the mules used to tow canalboats were stabled at the abandoned settlement of Dresden: 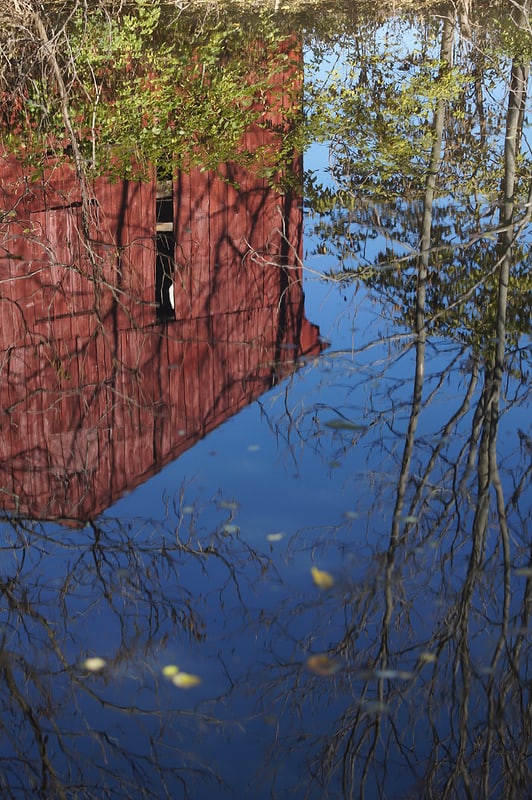 Across the trail from the barn is the Army Corps of Engineers Dresden Lock and Dam complex in the Illinois river; to its south a few fishermen were out. Although I was angry at myself over losing my glasses, and dreading the expensive, weeks-long process of new prescriptions and frames and lenses that I’d have to begin when I got back to Chicago, it was hard to stay in a bad mood on such a beautiful day. 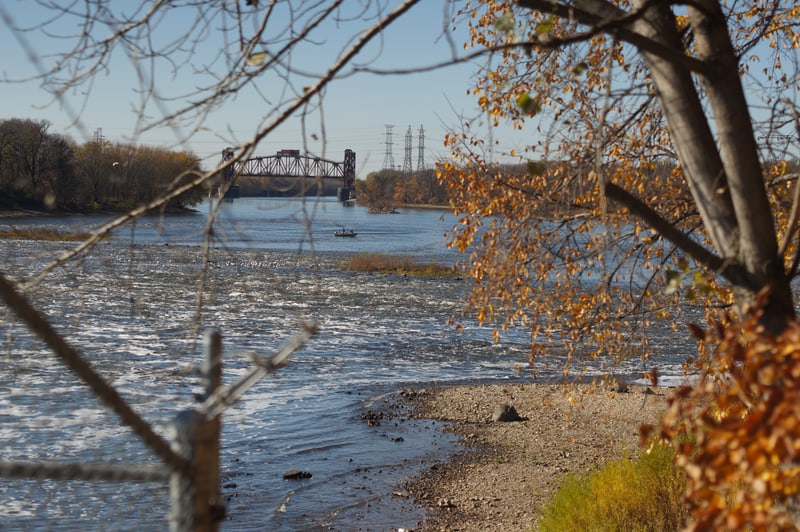 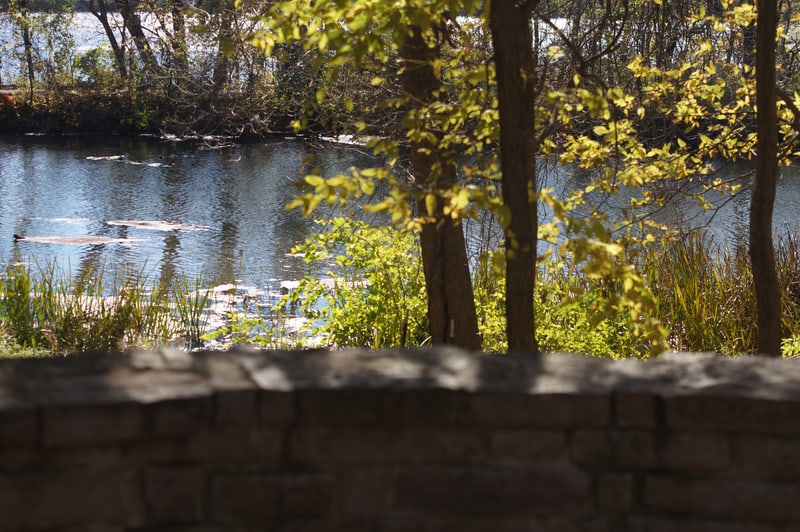 At Lock #6 by Channahon Woods I took pictures of the locktender’s house, which I wrongly assumed to be uninhabited until the door opened and someone released two very large dogs. 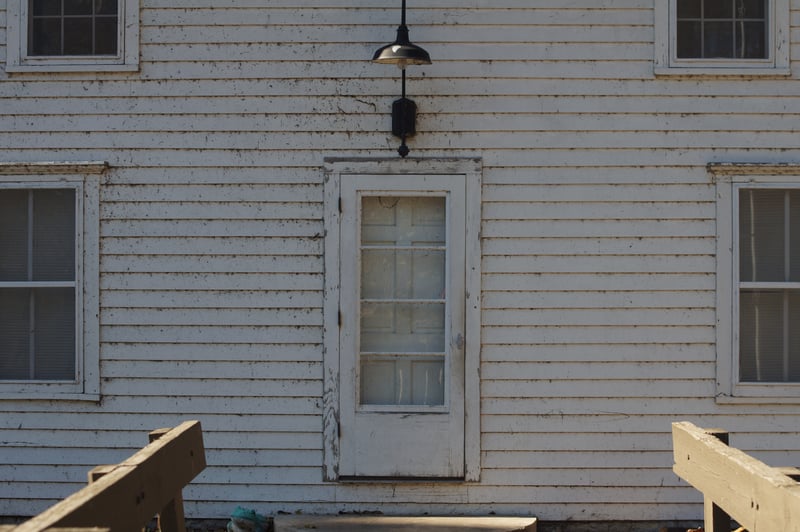 At this lock some of the original lock machinery was still in evidence. 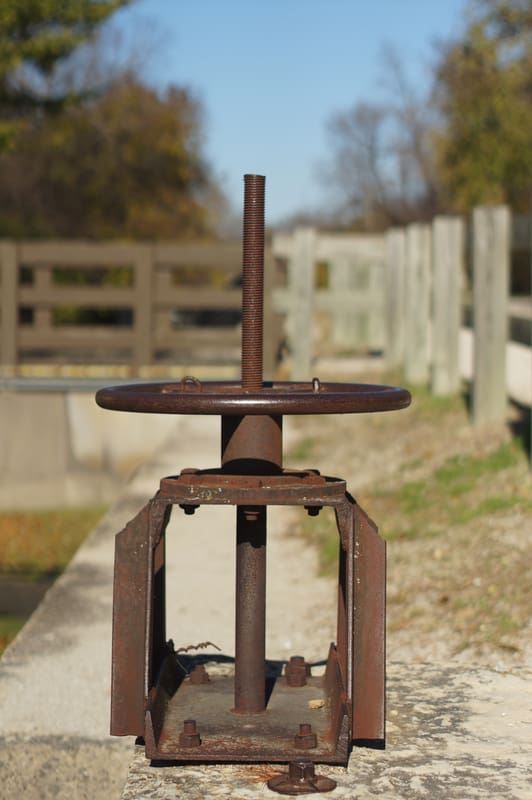 After Channahon I found myself riding through some denser woods, hearing rifle shots every minute or so (it was pheasant and rabbit season, I think), and regretting the decision to leave at home the blaze orange wool jacket I’d almost brought with me. But soon I was in Joliet, taking very bad route advice from Google Maps, which had me crossing a highway on a terrifying but short overpass, and then—perhaps noting my location in Joliet and attempting an an homage to the classic scene from Blues Brothers—tried to send me over this open drawbridge: 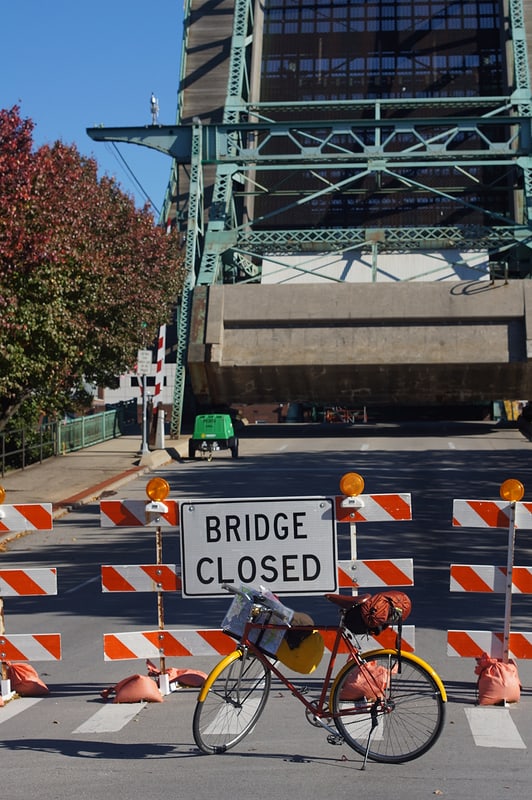 But eventually I found my way to the Metra station and made the 2:25 pm train with plenty of time to grab some lunch first. I was dreading the last 10 miles from LaSalle Street Station home, but after so many miles of crushed limestone the paved Lakefront Path felt like cheating and I made it just in time for my class.