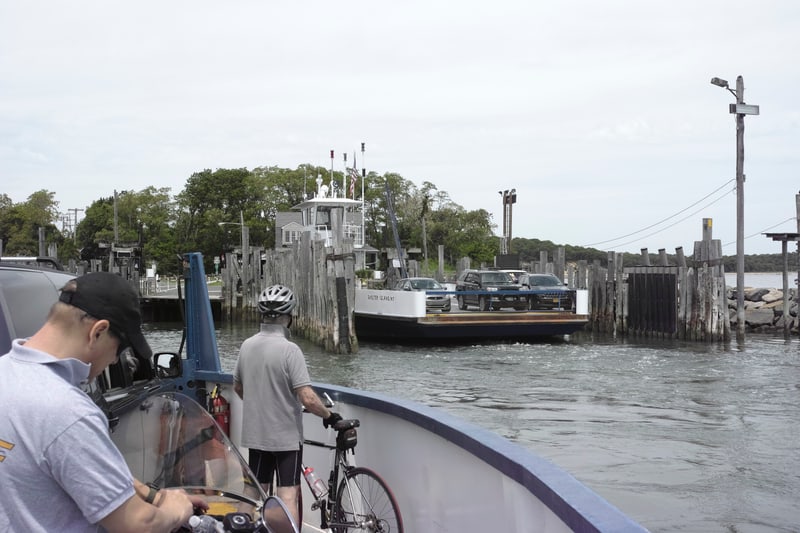 After my last 200k ride, I swore I’d never do something so stupid again, and then a couple days later I signed up for the Long Island Randonneurs’ Ronkonkoma 200k. This was my first true mass-start brevet (I’m not counting April’s populaire) and my third ride of this length.

The field was quite large (I believe over 40 riders; RBA Steve Yesko said this was the most they’d ever had) and included many first-time randonneurs. There were large contingents from both the New York Cycle Club and the Five Borough Bicycle Club, somewhat overwhelming the bike inspectors at the start–we ended up starting a few minutes late.1

I was determined to significantly beat my previous 200k time and to finish in under 11 hours. Since I’m no faster than I was two weeks ago, I planned to do this by taking fewer and shorter stops. (On that last ride, for example, we’d eaten a sit-down lunch at a diner.)

Pretty quickly after the start of the ride I found myself following some club cyclists–5BBC, I think. Never having done any real paceline riding I always worry about the etiquette in these situations, and I’m not sure they were happy to have me on their wheels, but they didn’t seem to rotate much so I never got a chance to take a pull in front. After riding together for an hour or so, they stopped at a gas station; I was feeling good so I kept going.

In fact, I was feeling so good that when a group of three riders began to pass me, I held on against my better judgement. They were much stronger than me, and pushing myself to match their pace was surprisingly fun, but it became clear that I couldn’t maintain it for long. After a few miles I dropped off. I don’t know if that short stretch of fast riding wore out my legs or if I’d simply reached the point where I was no longer fresh, but I never felt as strong after this point.

Around mile 53 I reached the second control at Goldberg’s Deli in Wainscott. I lost a little time overshooting the control and then trying to find the entrance, so I was more set than ever on getting in and out quickly. I filled my water bottles and bought some snacks and an (excellent) bacon-and-egg sandwich, which I ate as I rode.

The best things about this route were its two ferry crossings, and I reached the first, the South Ferry from North Haven to Shelter Island, about ten miles out of the deli. Though brief, the ferry ride was a nice chance to rest and enjoy the views of Peconic and Gardiners Bays. For the most part, I found the Hamptons unappealing: the massive houses and expensive cars of the ultra-rich and the way the shoreline is always walled off behind gates and hedges are offensive to me. But from the ferry I could see how this lovely this coastal landscape must have been before all of that.

A few miles later (including a few bonus miles after I missed a turn), I boarded the North Ferry from Shelter Island to Greenport–this time in the company of several other randonneurs, including one on a fixed-gear pushing a huge gear. But they took a break at the Greenport ferry landing, so I rode on alone.

I rode most of this leg–from the ferry at mile 67 to the control at mile 95–alone, stopping once to buy water, and again to fix a flat (with two flats on my last ride and one on this one, I think it’s time to replace my tires). Near the end, though, I caught up with a couple on matching Canyon bikes, and we reached the control (a gas station) together. I spent a little longer here than I had at the deli; the RBA had slices of watermelon (delicious!), salty snacks, ice, and water. At this control I met Charlie, who was riding this brevet for the fourth time; before heading out he warned me that the hills were all ahead of us, in this last 35-mile stretch.

I rode out with the same couple I’d arrived with, but they quickly left me behind when the climbing started. I’m not much of a climber on my best day, and with a hundred miles in my legs I’m useless. On one of the hills I caught up with Charlie; we were both hurting, and we ended up riding (and, in a few spots, walking) together the rest of the way. There was one more info control at mile 117, where we allowed ourselves five minutes to rest; from there it was mercifully flat back to the Ronkonkoma train station.

Despite nearly an hour and a half of stopped time (according to RideWithGPS), I shaved 59 minutes off my previous time, and met my goal of finishing in under 11 hours. I’m not sure if I’ll do one of these again, or if I want to focus so much on my time if I do; that focus meant I spent more time riding alone and missed out on some of the camaraderie for which randonneurs are renowned.2 But I enjoyed doing this one, and hey, now I can say I’ve seen the Big Duck.