I Sugar River by bike. i

Last summer M– and I took a rushed trip to Sugar River Forest Preserve in a rental car, and all this summer I’ve been scheming to get back–this time by bike.

In July my first attempt went comically awry. M– had planned to join me but bailed when the forecast showed record heat and humidity in combination with a chance of heavy rain. Like a fool, I tried anyway, taking the Metra to Harvard and heading west. Soon I began to have problems with my aluminum fender rubbing on my tire under the (moderate) load in my front bag, which I couldn’t manage to fix after half a dozen trailside attempts (though I caught a nice case of poison ivy for my efforts). Fearing a blowout in a remote location (the Compass Chinook Pass tires with their extralight casing are notoriously prone to sidewall failures) I turned back after maybe 10 miles. My train arrived back in Chicago just as the skies opened up and I rode most of the way home from the train station in the pouring rain. The last couple miles I walked, after I double-flatted on the rim of a massive pothole hidden under an innocent-looking puddle (I had only one spare tube and couldn’t get a patch to hold in the wet). 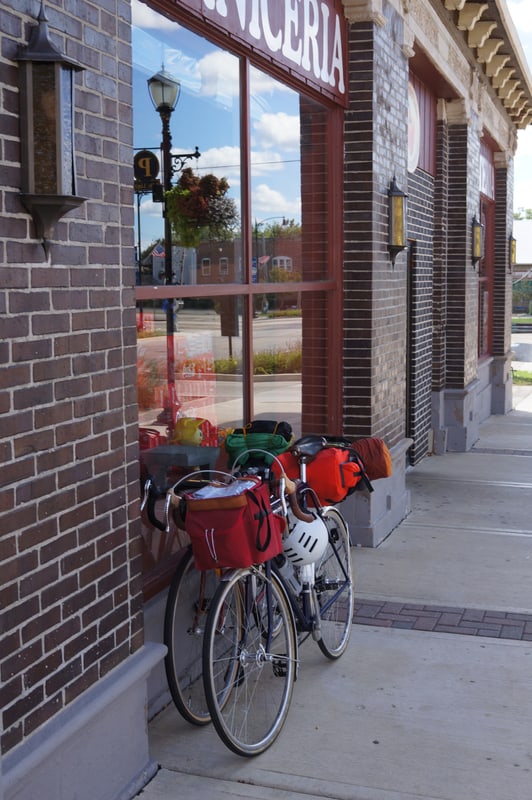 After this ignominious failure I was reluctant to try again. But this weekend M– and I once again made our customary last-minute crosstown mad dash for the train (somehow we never manage to get out the door with much of a margin). At Harvard we bought some snacks and then headed out. 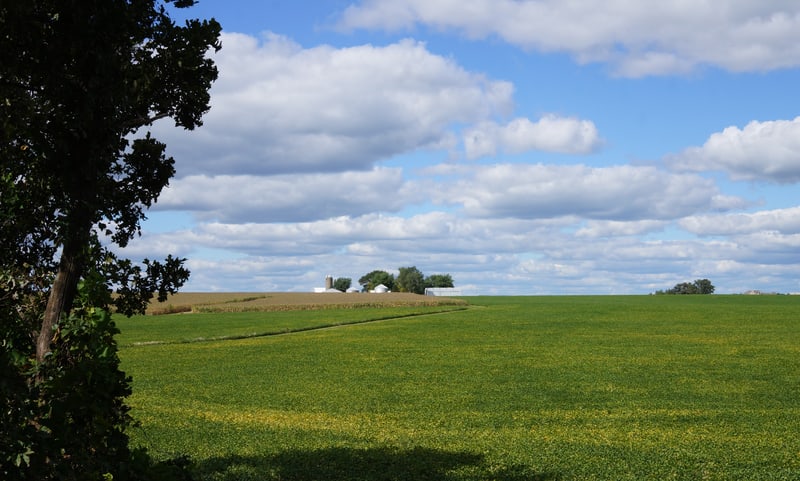 In contrast to my earlier trip the weather was perfect, in the high sixties and clear. We took the Long Prairie Trail west from the McHenry-Boone county line. It’s a nice trail, more remote than other Illinois rail trails, passing through a number of small towns with services (which in tiny Poplar Grove means homemade tamales at the small grocery just beside the trail) but without much in the way of sprawl, and through endless farms in between. 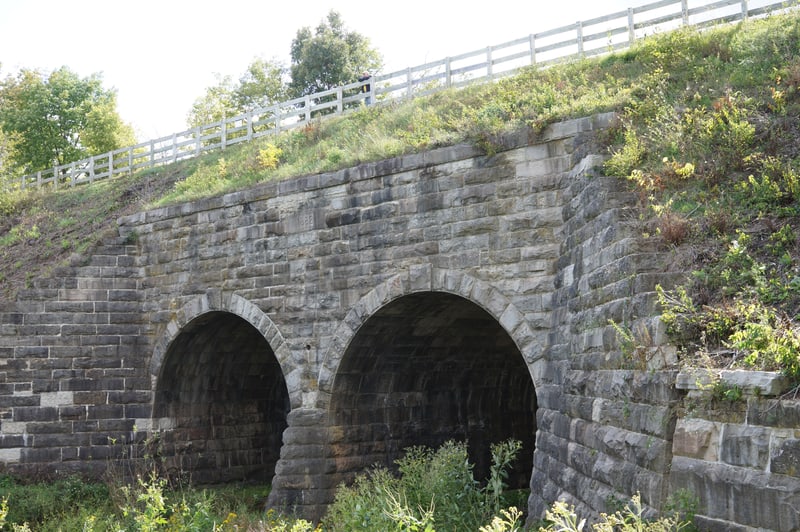 At the Winnebago County line the pavement turns to crushed limestone and you’re now on the Stone Bridge Trail–and if you find yourself here it’s absolutely worth walking down the side path to get a view of the eponymous bridge from below. 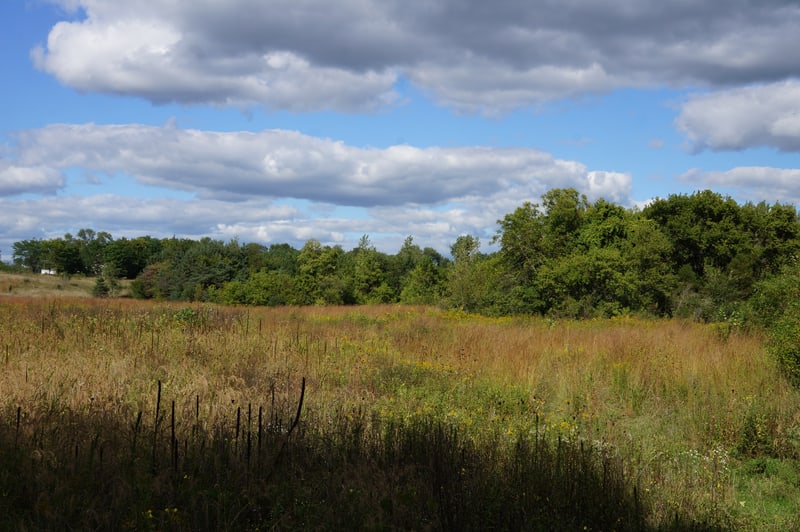 Its mass and scale are unexpected in the middle of so much prairie.

On the advice of a local rider we’d met at the trailhead, we left the Stone Bridge Trail at Elevator Road to follow the Hononegah Recreation Path to downtown Rockton, where we found fuel for our camp stove, a much-needed dinner, and the celebrated Dairyhäus. It was at this point growing perhaps a bit chilly for ice cream (temperatures were forecast to drop into the low 40s that night) but we didn’t let that stop us from enjoying a Rockton institution.

From Rockton it was only another nine miles–mostly along rolling country roads–to the Sugar River Forest Preserve, where we were rewarded with a long descent to our campsite. 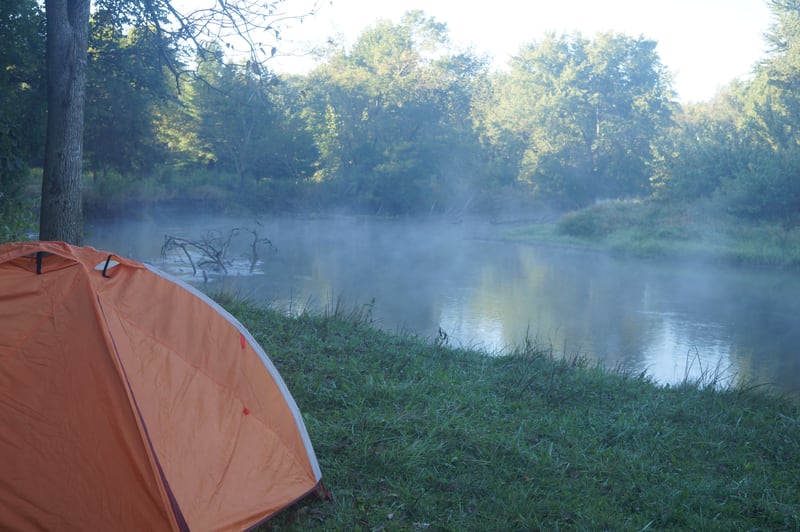 After a chilly night warmed by bourbon and the campfire, we woke early to the mist rising off the river. As on our previous trip we’d stayed in one of the primitive walk-in sites right along the Sugar River. (Next time, who knows–maybe we’ll go fishing. “A pole doesn’t weigh much,” a local fisherman reminded us as we headed out.) 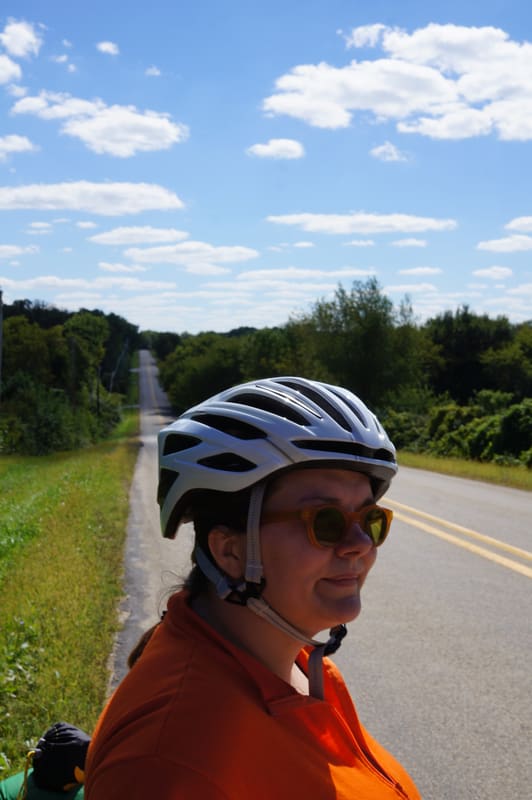 M– is the adventurous one and she decided she’d had enough of trail riding–we’d take the roads back. (Also, her knee had begun to bother her and we thought we might shave a few miles off the trip this way.) So over a huge breakfast in Rockton (and after stocking up on ibuprofen) we plotted a route using the Illinois bicycle maps:

This was a wonderful route–beautiful countryside, rolling hills, and astonishingly little traffic for most of the way. If we ride to Sugar River again we’ll probably take this route.

We reached Harvard even earlier than we’d hoped given our late start (with enough time to grab some really excellent tacos al pastor at La Loncherita) and caught the 4:35 home.

My new Zeitgeist saddle bag from Swift Industries meant that I could carry my share of our supplies, and that M– could forego her rack and panniers for the Revelate Pika, a fancy ultralight bikepacking bag. Whatever bikepacking cred this might have bought us we immediately squandered by strapping a camp chair to the top–but it was worth the pound and a half.

With my rack and fender clearance sorted out my Treetop rando bag was solid and once again managed to swallow up an astonishing amount of stuff.