I Blackwell Forest Preserve. i 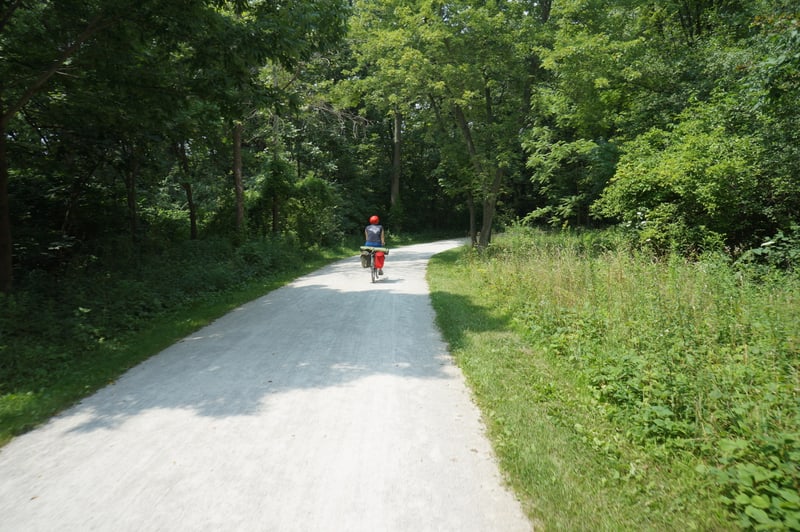 Inspired by Let’s Go Ride a Bike, M— and I headed to the Blackwell Forest Preserve in DuPage County this weekend, desperate to get out of town after a failed attempt to camp at Illinois Beach State Park last weekend (they were full). Having learned our lesson, we set off on Saturday morning with a reservation in hand.

The Metra BNSF line took us from Union Station to Naperville, from which the campground in Warrenville is only a few miles away. We took the scenic route through the very pretty Herrick Lake Forest Preserve which connects to Blackwell with limestone paths. 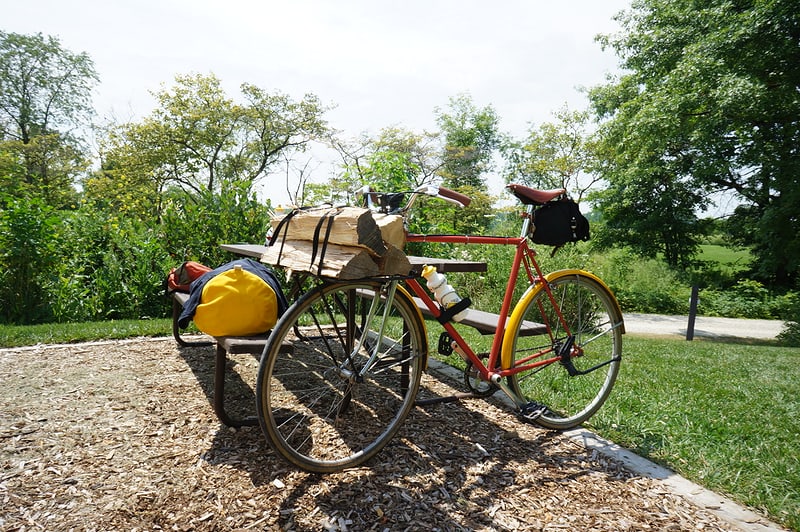 We weren’t quite sure what to expect at the campground. It was quite full and our reserved site backed directly onto another site, affording little privacy. But luckily we were able to switch to site #1, which has two advantages for the cyclist: it’s a bit more private than most of the other sites, and it has no place you could conceivably park a car, so it was still unclaimed. Not quite a true hiker-biker site, but good enough for our purposes. It even had a bit of a view of Silver Lake! 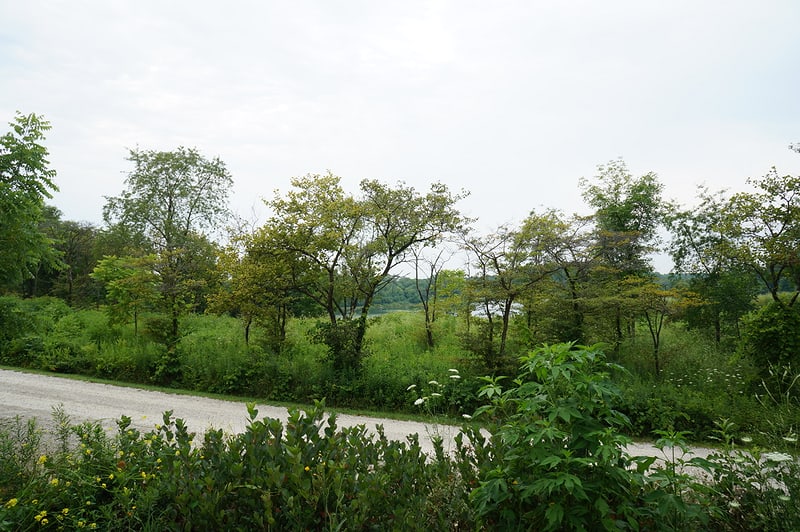 Having made camp we set out toward our other reason for visiting Warrenville: Two Brothers Brewing. The taproom was only two miles from our campsite and seems like a popular destination for those staying at Blackwell (desperate, perhaps, to escape the firmly enforced alcohol ban at the forest preserve); we ran into another couple about to ride back just as we pulled up. The beer was delicious, the food tolerable, and screened-in outdoor dining area very much appreciated (the mosquitoes, we were dismayed to learn, are hardier and more numerous in the western suburbs than we are used to here by the lake). Too soon it was time to head back. 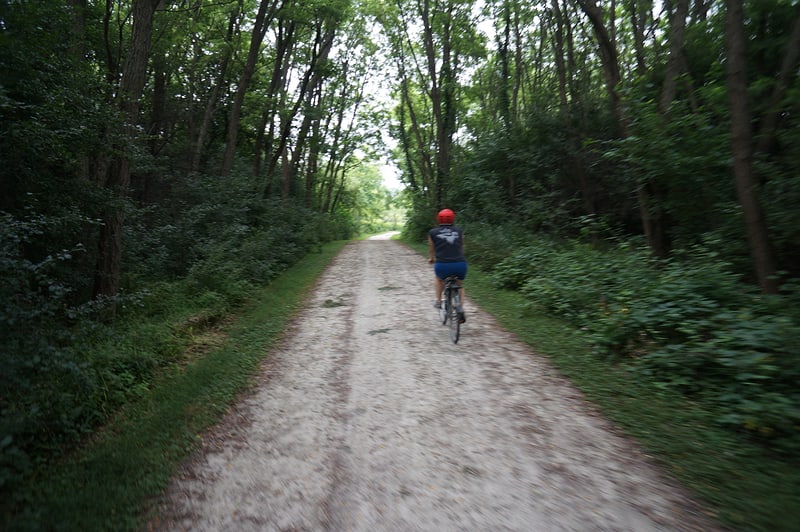 We read by the fire until it became too dark, then tried to cook some grocery store vegetable-and-steak kebabs, only to discover that the fire pit grate was rusted in place and couldn’t be used. But the ever-resourceful M— managed to cook everything perfectly on our Trangia in no time at all. 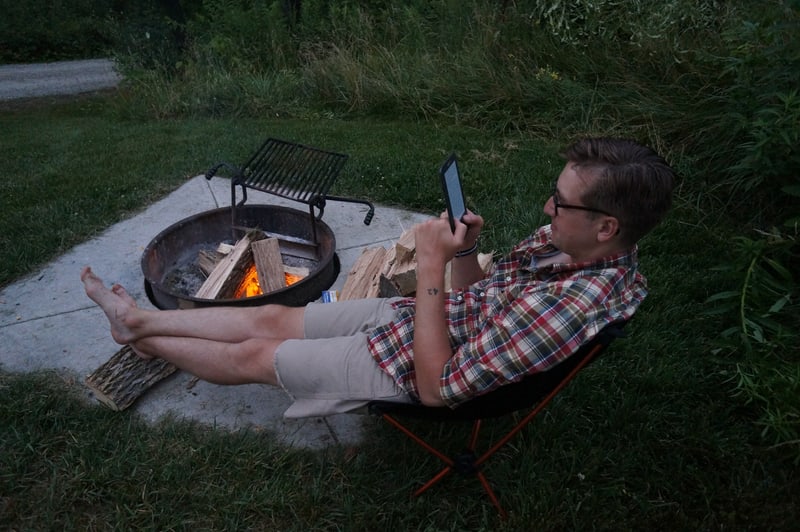 In the morning we rose early, made some scrambled eggs with mushrooms and cherry tomatoes (delicious) and attempted to cook frozen hash browns (less successful), and headed to the boat launch to rent a canoe. 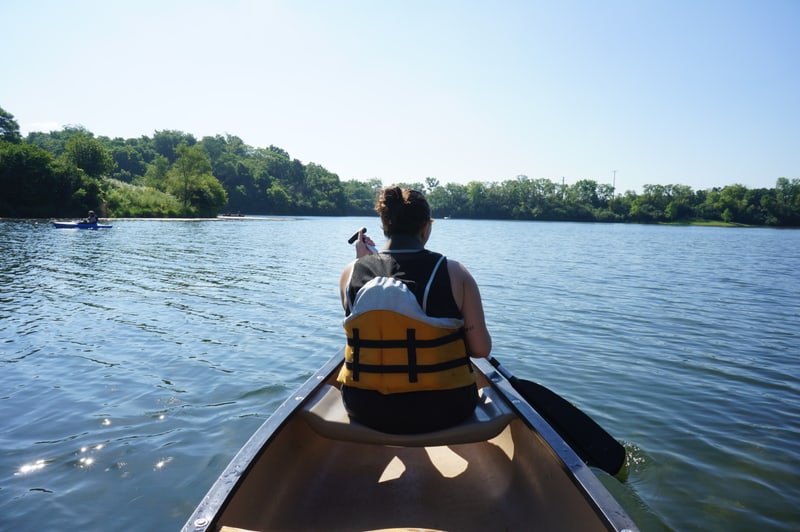 Silver Lake is not large and we were able to explore most of its perimeter in an hour. But it has a number of interesting nooks and crannies, a tiny island, and water clear enough to see the fish among the forests of kelp in its shallower parts. 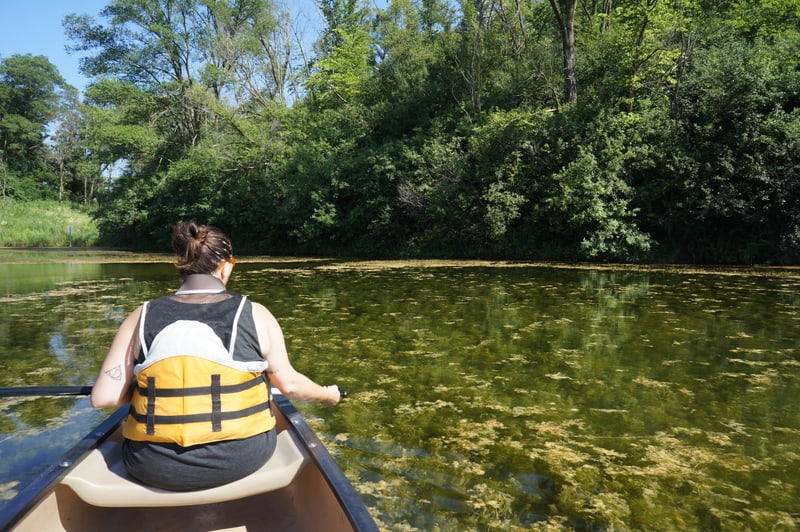 Then we had to strike camp and head back to Naperville to catch the 12:33 train. We decided this time to attempt a different route, along the West Branch DuPage River Trail, which was quite nice until we misunderstood which left turn to take and ended up on a trail which started out as very loose large gravel and then turned rapidly to doubletrack and then singletrack (our fully-loaded city bikes attracting odd looks from the local mountain bikers) before spitting us out on the sidewalk in a suburban cul-de-sac. 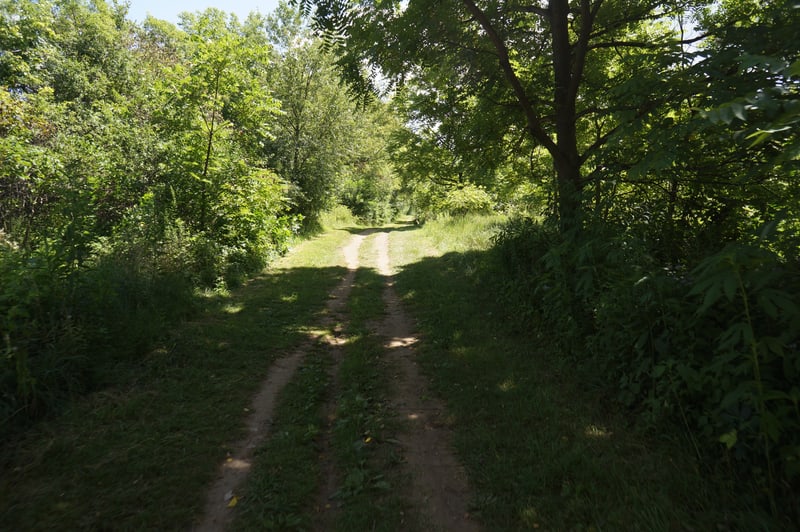 No matter; it took us more or less in the right direction and it was not hard to get to the train station, where we had just enough time for a couple of beers at the nearby Orazio Pub before heading for home. 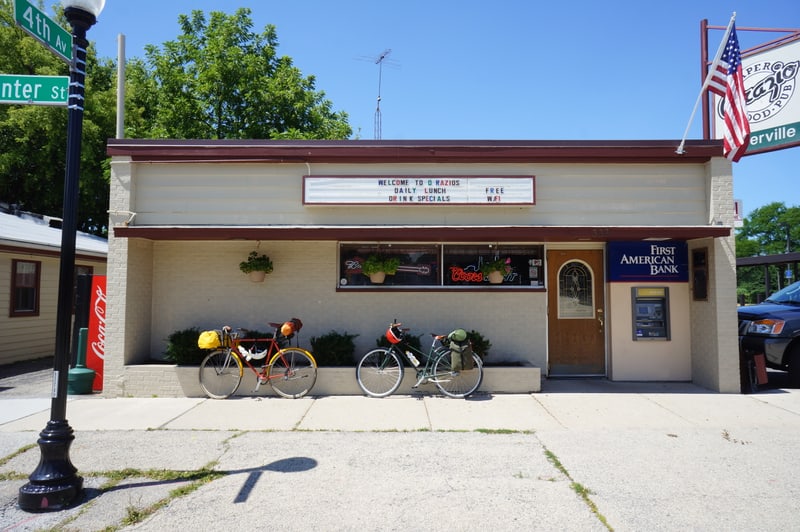