I Ottawa Lake at Kettle Moraine. i 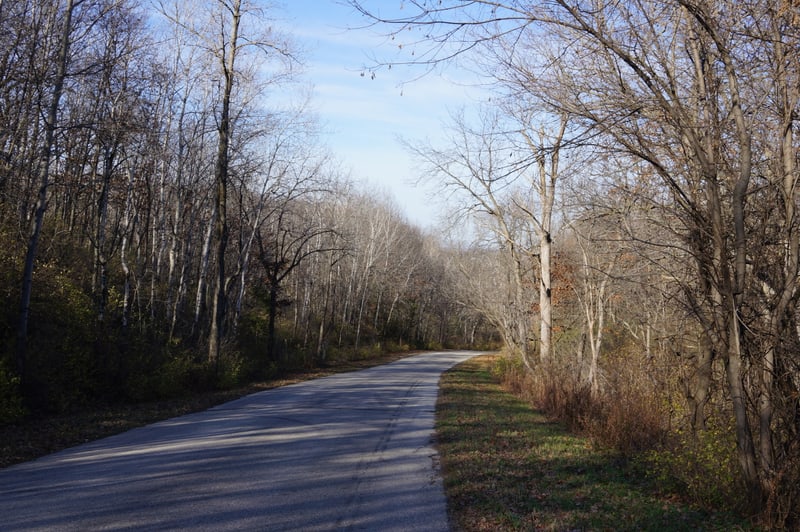 Ever since John at Uptown Bikes mentioned that the campgrounds in Wisconsin’s Kettle Moraine State Forest are within striking distance of the Harvard Metra stop–in my mind I’d always imagined they were much further–I’ve been wanting to make the trip.

This weekend (the last before we leave the country for two weeks) was forecast to be unseasonably warm and sunny and M– and I had planned a trip to Illinois Beach State Park, where she’s never stayed. But at the last minute she got sick and decided to stay home. Since I’ve been to Illinois Beach before, I thought I’d try for Kettle Moraine instead. The campgrounds (there are several in the Kettle Moraine State Forest) where we’ve stayed while car-camping in the past–Whitewater Lake and Pinewoods (my favorite)–closed at the end of October, but the Ottawa Lake campground is open year-round.

The sun sets pretty early these days here, so I left in the morning to make sure I’d reach the campground in daylight. I headed north out of Harvard through the unincorporated community of Lawrence and across the Wisconsin border.

My first stop in Wisconsin was Delavan, known to some for its circus history (motto: “19th Century Circus Capital of America”), to others as the hometown of Wisconsin’s dreadful governor, but to me primarily as the starting point for the Great Lakes Randonneurs’ brevet series, which I’ve always wanted to ride but never have.1 Perhaps because of its randonneuring associations I had high hopes for this town, but I was disappointed. It seemed an exceptionally smug place with little to be smug about. At every curb cut there are stenciled proscriptions against parking your bike on the sidewalk (where, one wonders, is one to park? the implied answer, I think, is not in Delavan). After a foolhardy attempt at breakfast at an establishment serving “American fries” I cut my losses and tried to leave town, eventually succeeding after trying numerous streets which seemed like they ought to connect up with County Road O on my map, but instead dead-ended at cemeteries and megachurches.

County Road O, surrounded by farmland, might have been scenic in July, but in November the fields were dirt and the views monotonous; but soon I reached the edges of the eponymous moraine. The land grew more undulating and the roads twistier. Approaching Palmyra (the next, and last, town through which I’d pass) there were an embarassment of quiet back roads (including the one pictured above), and I only wish I’d had a chance to ride more of them.

Palmyra itself is a lovely town on a lovely little lake in which I should have stopped but didn’t. I’d forgotten, but M– and I stopped here for breakfast (and some nice enameled camp mugs at the excellent hardware store) a couple years ago on a car-camping trip to Whitewater Lake.

Another eight miles found me at my destination, and I set up camp in one of the secluded walk-in sites overlooking Ottawa Lake itself. It turned out that–while it’s open year-round–the Ottawa Lake campground is unstaffed after October, and no firewood is available, so I had to make do with the few scraps of wood I could gather to build a short-lived fire, after which I retreated to my tent for the night. 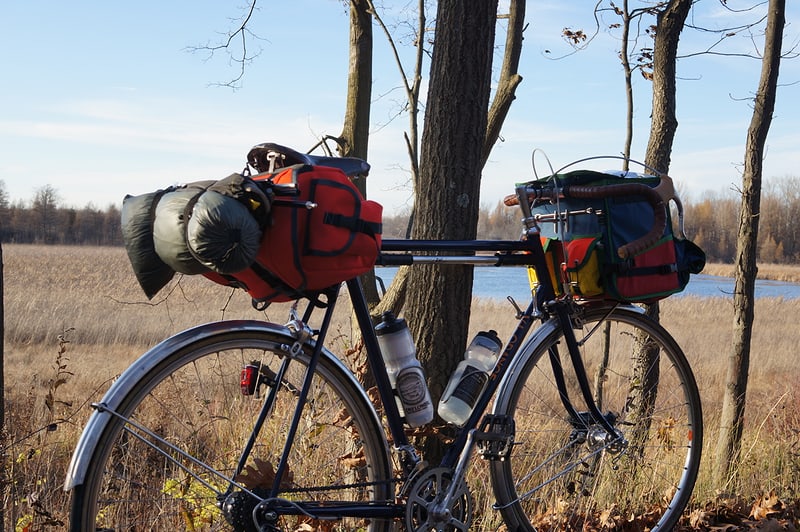 In the morning, worried about making the 12:35 PM train (the last for four hours), I headed out early and skipped the most scenic country roads in favor of more direct routes. Because of this (and because the previous day’s tailwind was now a headwind) the ride became a bit of a slog; but I found myself back in Harvard with enough time to grab three astonishingly good tacos al pastor from La Loncherita.

This was my first ride with the fantastic Ocean Air Cycles Docena demi-porteur bag (made by Swift), which worked very well. The two-level main compartment with expandable lower section let me easily separate snacks and camera (on top) from camping gear and clothing (on the bottom). While I prefer my smaller Treetop tall rando bag for day rides, the extra capacity and (especially) organization of the Docena are perfect for camping trips. In warmer weather I could easily camp with just this bag and the Revelate Pika.

The Swift Zeitgeist saddle bag’s drawcord ripped its way out of its nylon sleeve while I was packing for this trip and is currently on its way back to Swift for repairs. This was a little disappointing (it was only my second overnight trip with this bag), but I was able to continue by using only the side-release buckles to close the bag.

This was also my first trip with the Tarptent ProTrail. I really like this tent. With the optional poles (it’s designed for use with trekking poles) it weighs under two pounds; it’s very packable (it’s the gray-green bundle strapped to the back of the saddle bag in the above photo, and it’s packed very loosely there). The setup (once you get the hang of it) is much less fiddly than it seems, and the tent is very secure once pitched. The end (vs. side) entrance is not ideal, but it bothered me less than I expected, and I think it’s worth it for the simplicity it enables.