I Illinois Beach State Park. i

At some godawful hour of the morning on Saturday M— left for a trip to New York with a friend, and rather than rattle around at home all weekend reading MetaFilter I decided to take my first bike camping trip—an easy one, to Illinois Beach State Park outside of Zion, IL, about 40 miles from my door, and reachable almost entirely by bike trails.

A while back I bought a Cetma 7-rail front rack off Craigslist. I was curious about porteur-type racks but didn’t want to buy one new for lots of money only to find out I didn’t like it. This is the largest Cetma rack and seemed like overkill for anything I might ever possibly need to do, but it was cheap, and at the time the Cetma guy (it’s a one-man show in Venice, California) had put his rack-making business on indefinite hiatus to focus on building cargo bikes, so I couldn’t pass it up.

I’d mounted this rack once or twice but I hadn’t ever really been able to get used to the handling, even with no load (the rack is steel and weighs a few pounds itself) or trivial loads, so I always ended up taking it off the bike pretty quickly. So clearly the only thing to do was to mount it on my completely unsuitable bike (30-some-year-old low-end hi-ten bike boom road bike with a quick-release front wheel), load it up with twenty pounds of stuff, and try to ride 40 miles with it! 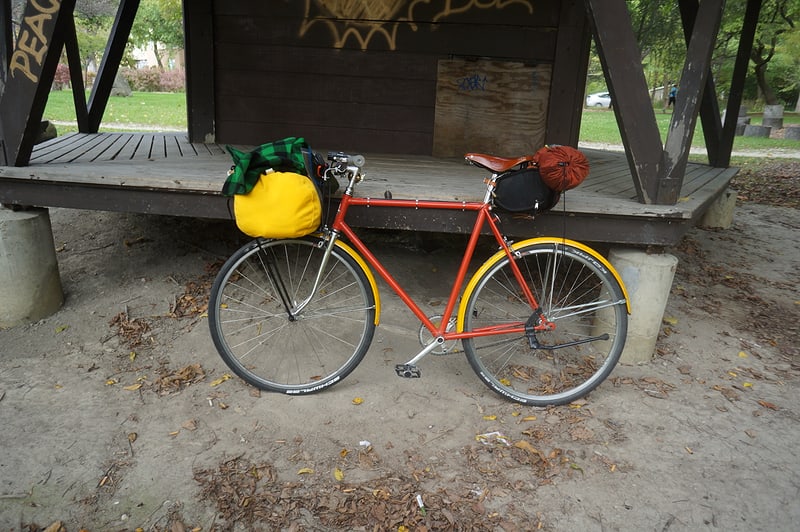 Here I am near the beginning of the trip. I’m pretty sure real bike tourers would look at my setup and laugh, but it worked for me. In the duffel are sleeping bag, Thermarest, and all the other odds and ends. My bulky wool jacket didn’t fit in the bag so it got strapped on top. In the back is my Acorn medium saddlebag with my tent lashed on. For the tent I used the nylon straps that Acorn sells specifically for its bags but on the front I used the superior Coghlan’s Arno straps. These straps are much better than anything else available (bungees, etc.). They are the very same straps that Rivendell sells at a ridiculous markup.

My route was pretty simple: North Shore Channel Trail through Chicago, Skokie, and Evanston, Green Bay Trail from Wilmette to Highland Park, and the Robert McClory Trail the rest of the way. The connections between these trails were a bit tricky (about which more in a followup post, hopefully) but otherwise the route is very straightforward. Much of the time it looks pretty much like this: 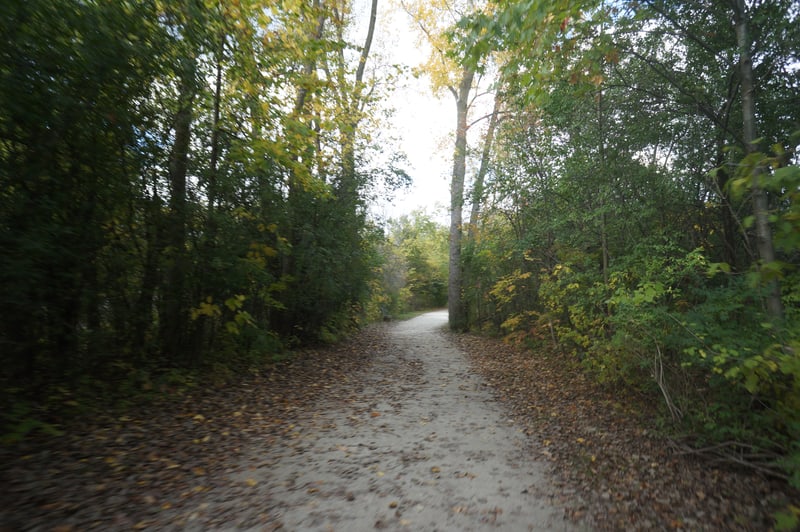 But sometimes there are weird detours and it looks like this (yes, in addition to being the side of a highway, this is an actual section of the McClory trail): 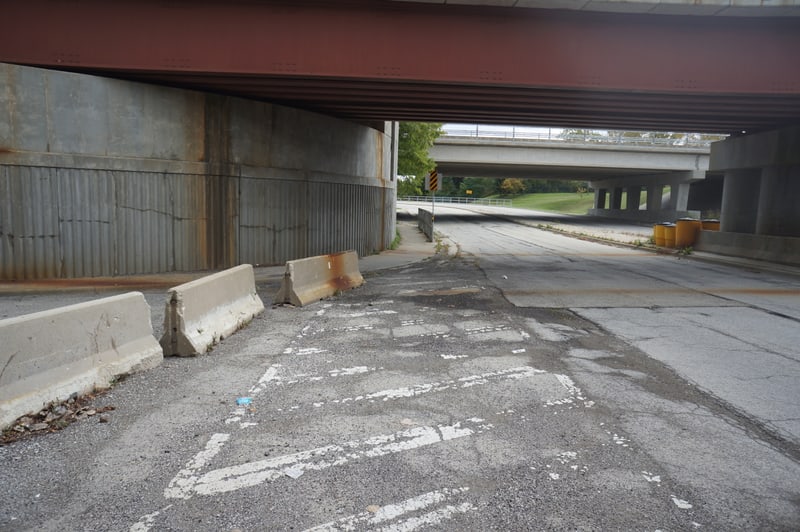 In Waukegan there is a more open section with numerous street crossings, passing through several community gardens as well as random back lots. Waukegan seems to be home to a disproportionate number of cool old vehicles. 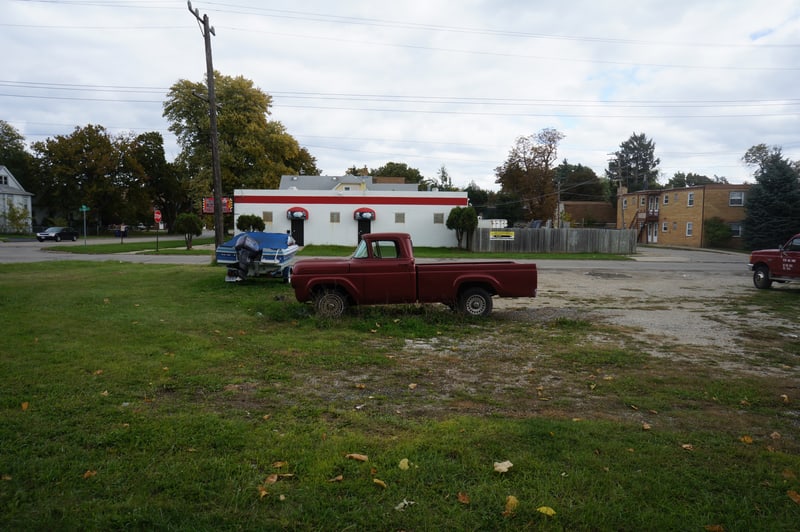 When I reached the campsite and unpacked, I’d grown so used to the feel of the bike fully-loaded that for the first few minutes riding it unloaded it seemed unmanageably twitchy. At this point all of my previous worries about the handling with the Cetma rack were gone. I’ll be leaving the rack in place (though I might install a wheel stabilizer to make parking easier); it’s too useful not to. It was very freeing to be able to ride into town, grab some groceries, strap the grocery bag down, and head back to camp, with no pannier to carry around and no worries about how much I could fit (the rack platform is 11” × 17”). 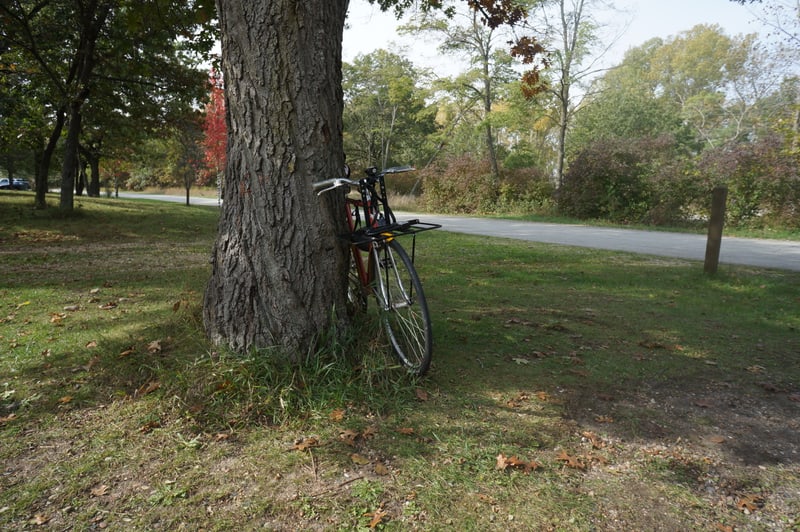 Then it was time to build a fire and sit back with a little bourbon and a book. (I’d brought Command and Control, about the history of accidents and failure in the US nuclear weapons program, since Illinois Beach State Park happens to contain a decommissioned nuclear power plant.) 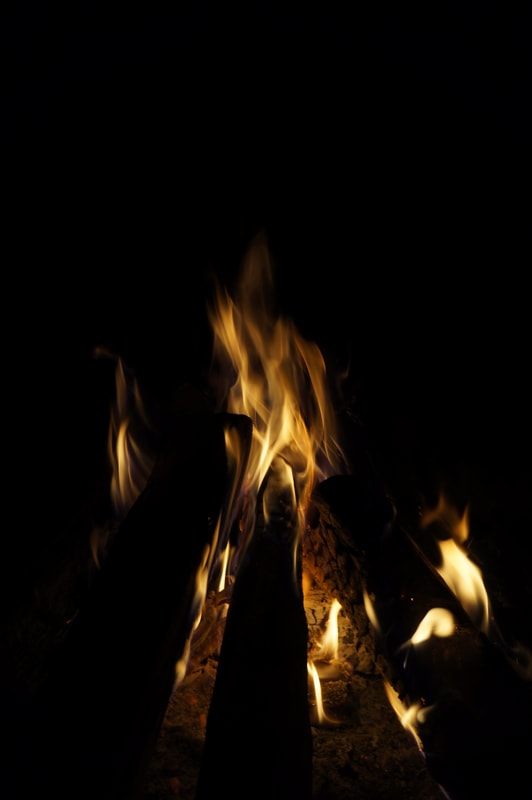 As a campground, Illinois Beach leaves something to be desired. It is primarily patronized by RVs. Campsites are very close with little separation (happily, it was mostly empty this gray and rainy mid-October weekend). Its proximity to the beach might be more appealing if I weren’t spoiled by living three blocks from Lake Michigan (which looks pretty much the same in Zion as it does in Chicago). There is a lot of street noise (there was also a haunted house set up just outside the campground when I was there with accompanying screams late into the night). The main thing it has going for it is that it is easily accessible from Chicago without a car. (I saw several other campers who’d biked in, and the Metra is also close.) But as a park, it is not-uninteresting, particularly if your tastes run more toward abandoned buildings than bucolic forest, and on Sunday I was able to explore it a little bit.

The park is divided into a North Unit and a South Unit. The South Unit is where the campground is, along with the swimming beaches. There are some interesting concrete shelters along the beach: 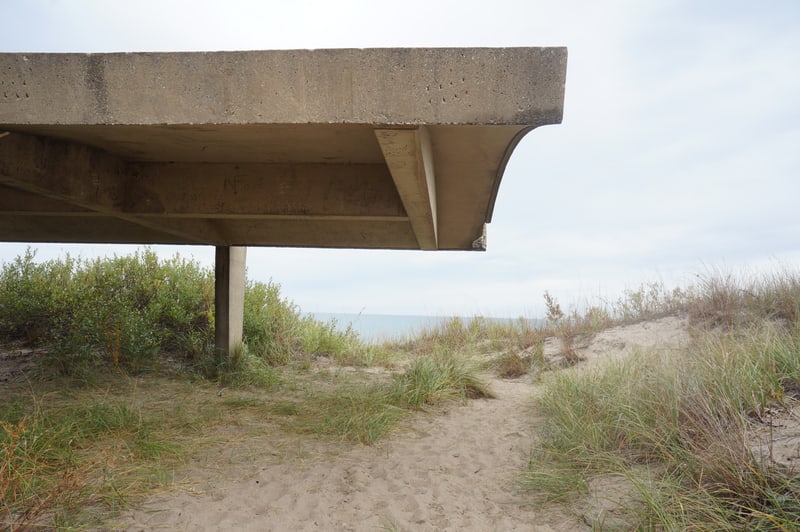 And two bathhouses (the southern one was closed for the season, but this one to the north looked well and truly abandoned): 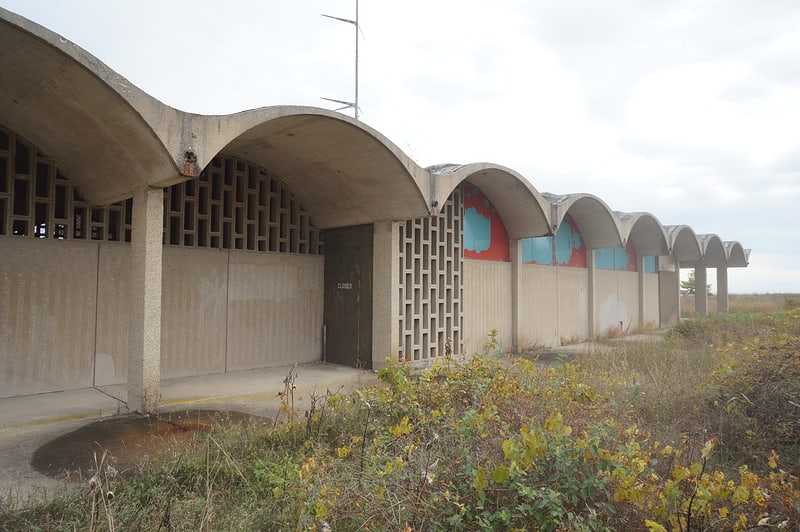 But the more interesting bits are in the North Unit, past the power plant. 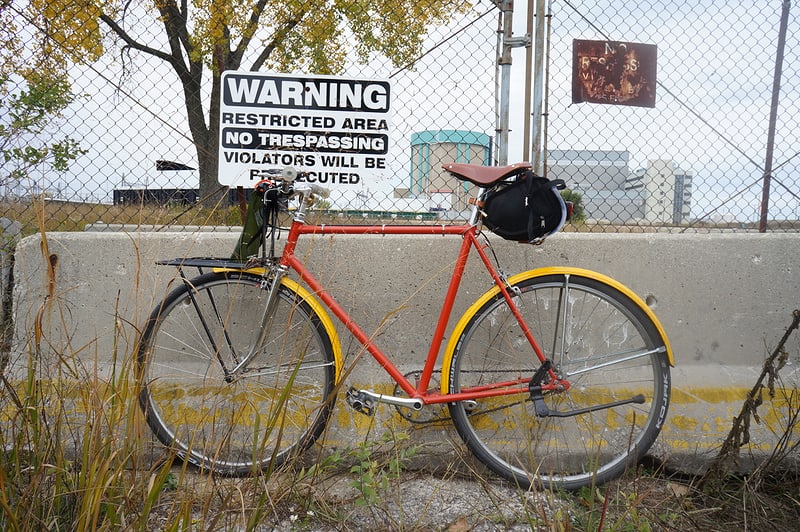 Although the plant is decommissioned, it is still brightly lit at night, and parts of the facility are clearly in use as some kind of electrical substation; you can hear the power lines humming overhead. 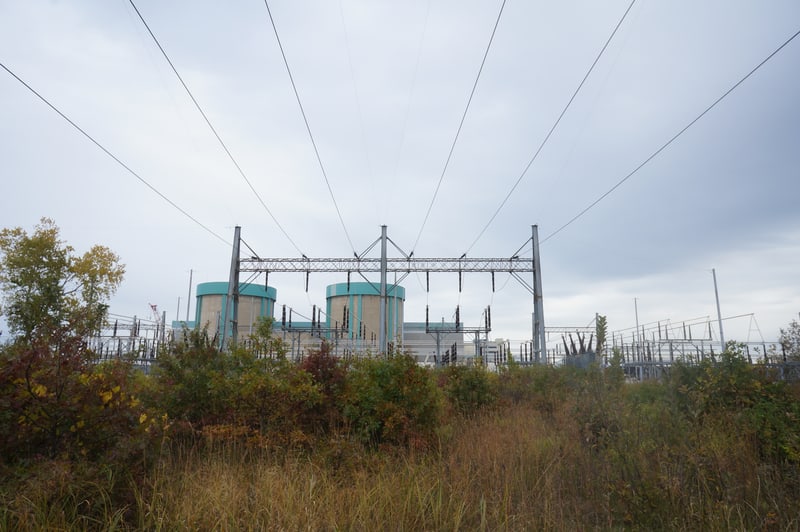 All around the place are these Illinois Emergency Management Agency monitoring stations. Those little white boxes say “Gamma Radiation Detector.” Whether their presence is reassuring or otherwise I will leave as an exercise for the reader. 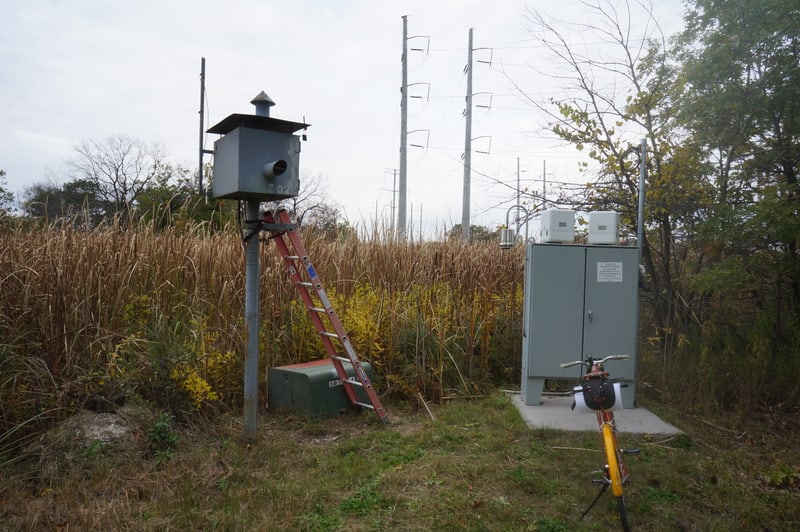 Past the power plant you are in the North Unit proper. There is no camping here and no swimming beaches, only prairie and woods with the occasional access road or trail, a fishing pond, and a couple picnic shelters. There was hardly anyone in this section of the park. There are lots of trails here; there is an official bike trail, and a hiking trail, but also a number of unmarked grass trails and muddy access roads (presumably for the backhoes, etc. that sat empty all around the park, adding to the generally post-apocalyptic atmosphere) that don’t really appear on the map. The conditions vary a lot and it is easy to end up on a trail that is totally unsuitable for a road bike. But that’s half the fun.

One particular area, Hosah Park, has a little boardwalk so that you can walk out over the grass without harming it. There is a sign saying that it is “essentially undisturbed:” 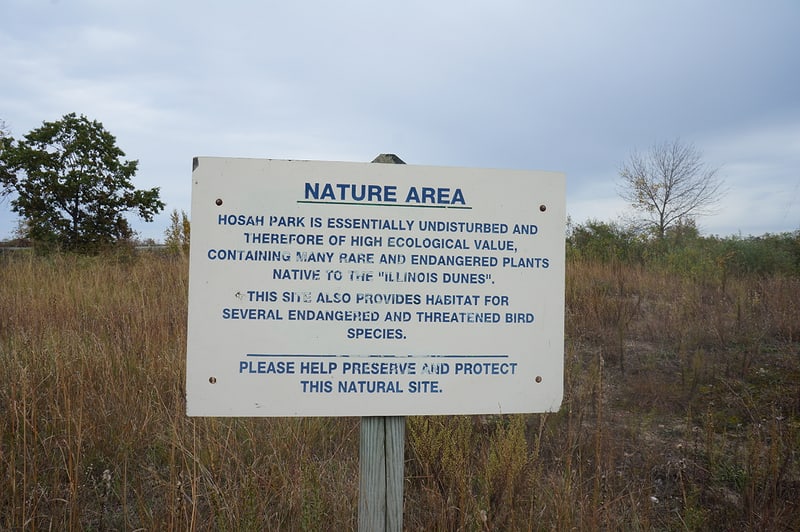 This sign would be more convincing if it weren’t next to these ominous concrete cylinders which seem likely to be the “on-site spent fuel pool” described in Wikipedia’s article on the plant. 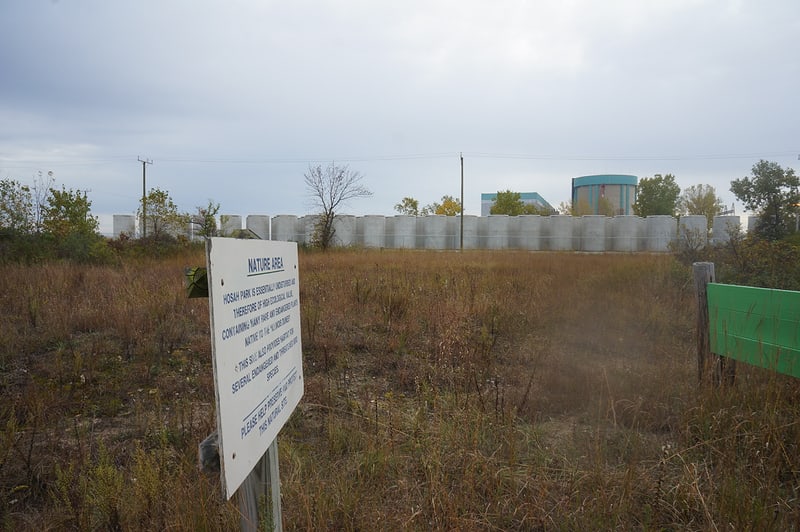 But as you get further north there are some genuinely scenic areas. 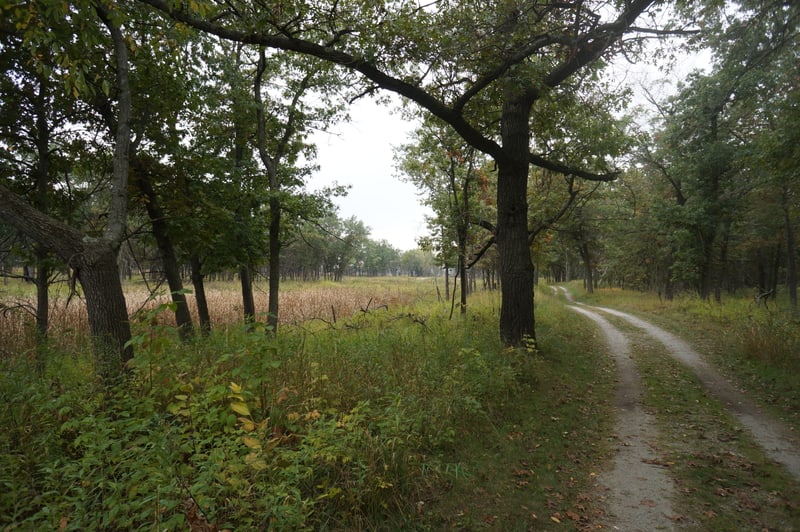 At the northern terminus of the park you reach the North Point Marina—full of Chicago-area boats in winter storage at this time of year, including the obnoxious Seadog, scourge of the Chicago River and the Chicago Harbor Lock. 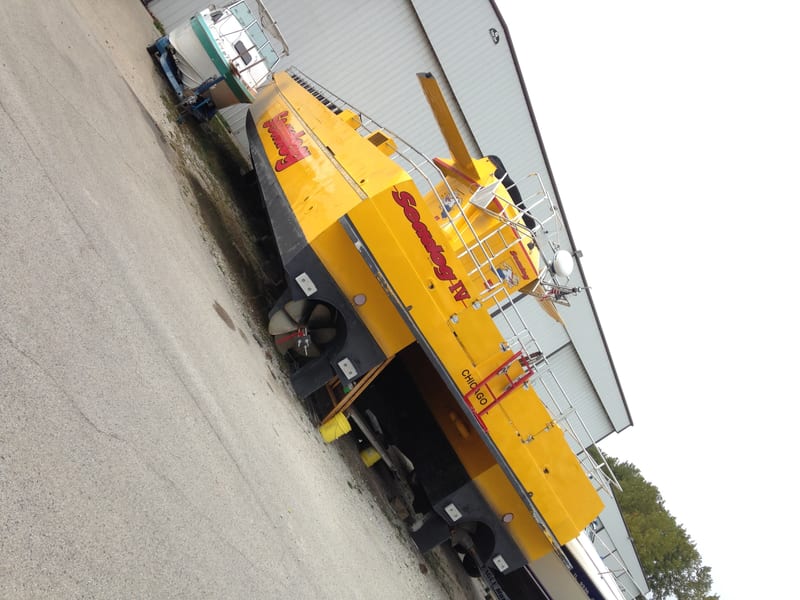 From the marina you can get out to the town of Winthrop Harbor. There isn’t much there, but once you’ve gone that far you might as well go a mile or two up the road to the Wisconsin border, just to say you did it. 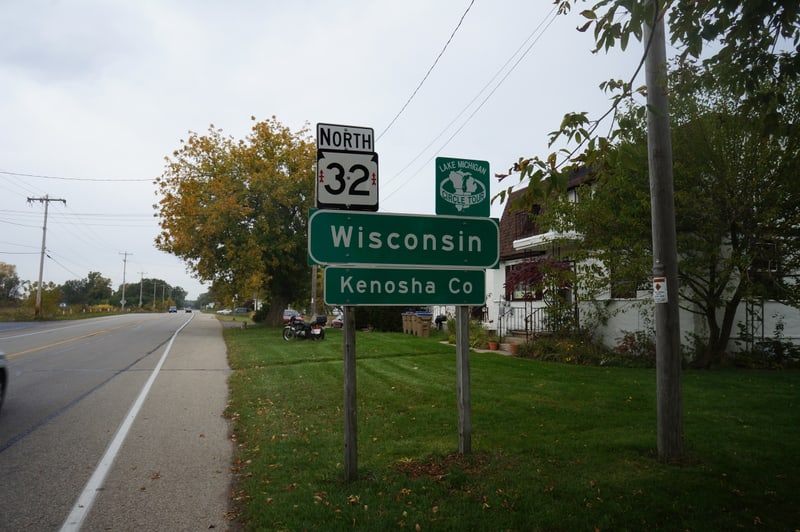 Monday morning there was time to use up the rest of the firewood and make some tea. 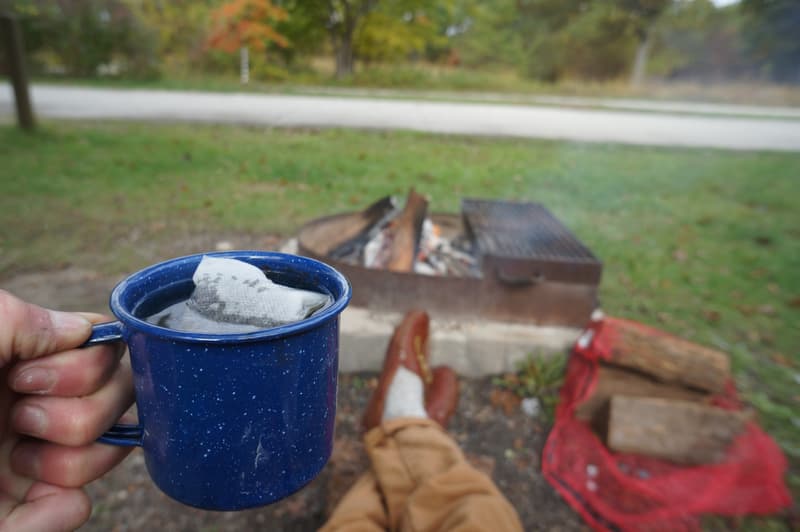 Then it was time to get back on the road. 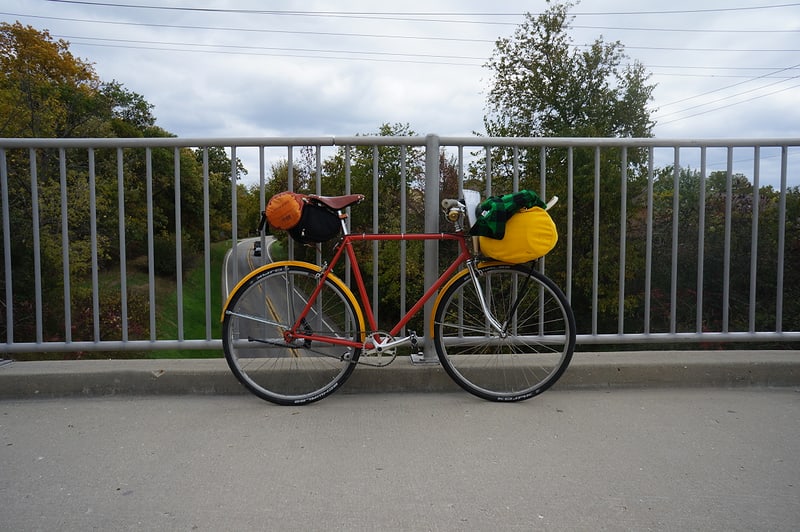 The next time I head this way I might have to stop to explore the lovely-looking Fort Sheridan Forest Preserve. 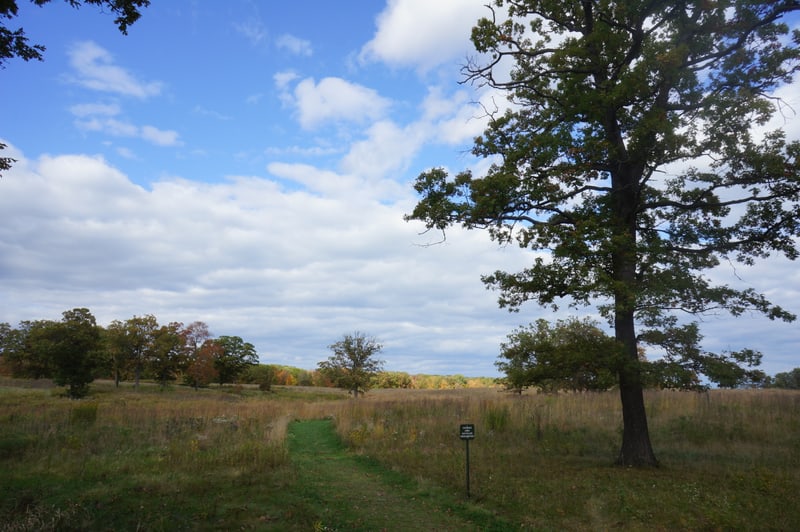 But on this trip I was eager to get home. 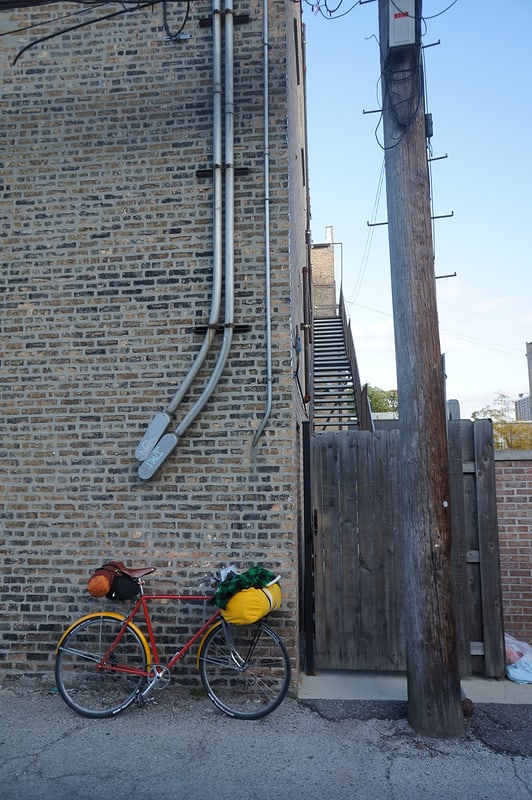 (Yes, those are the stairs up which I had to get the bike. Yes, I chose to carry it up fully-loaded instead of making multiple trips. Yes, that was a bad decision.)