I IDOT bike maps, wayfinding, and trails for transport (a rant). i

In preparation for my bike camping trip a few weeks back, I went and printed out nice color copies of the Illinois DOT county bike maps for Cook and Lake Counties, thinking that they’d do a better job of showing the bike paths I’d be using than Google Maps. I’d heard these maps spoken highly of by local cyclists. My experience, however, was that these maps so poorly described the actual ground truth of the situation that they were probably worse than using a simple road map.

Consider the connection between the North Shore Channel Trail (at its northern end) and the Green Bay Trail (at its southern end). Taken together, these trails run all the way from Albany Park in Chicago up to Highland Park, and provide one of the best ways of getting out of the city heading north. On the Cook County bike map, it certainly looks like the trails connect directly: 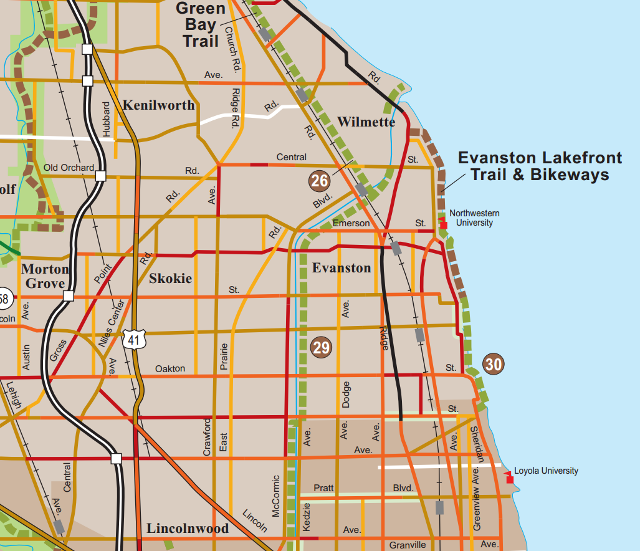 (Perhaps my first clue should have been that most bike trails on these county maps—maps ostensibly aimed exclusively at cyclists—are not actually named, but are instead given a number that you have to look up in a separate index. #26 is the Green Bay Trail; #29 is the North Shore Channel Trail. Can you imagine a road map designed this way?)

Here are just a couple of the problems with this map:

Compounding the confusion is the fact that the signage is often just as inconsistent as the maps. Each town along these trails maintains its own signage; some towns do this very well, some poorly, but none attempts any consistency with its neighbors. Often the trail will take detours through surface streets; these are very rarely marked with anything except signs that say “Bike Route.” Which bike route? Who knows! Sometimes, this is the case for the trails themselves; for example, here is the only sign of any kind marking the northern entrance to the Green Bay Trail in Highland Park: 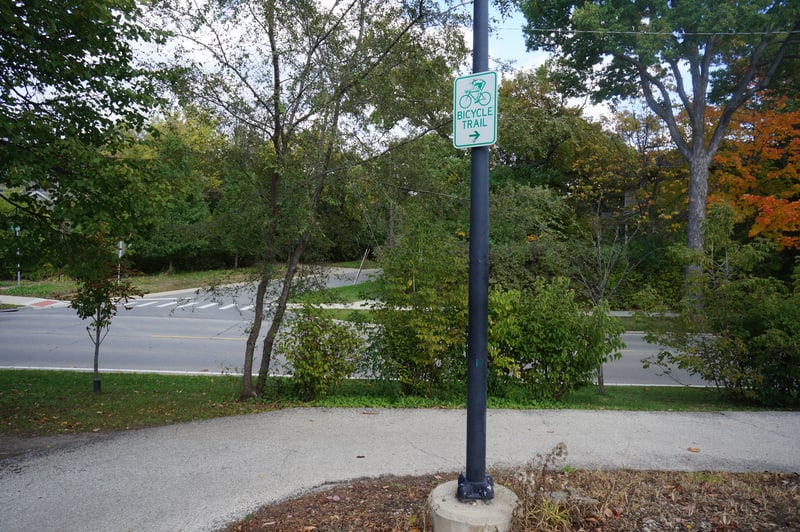 OK, the snazzy 80s clip-art biker is pretty cool, I’ll grant you—but it would be nice if the words “Green Bay” appeared here somewhere. This is about as helpful as a street sign that says “Street.” Possibly the planners of Highland Park didn’t consider the idea that a bike trail might be used by anyone other than locals on short recreational rides. Or possibly they are actively trying to discourage use by transport-oriented non-resident cyclists like me (certainly there is a general feeling of hostility toward bikes in this town). Either way, you have to wonder what the point is of having any sign at all if you’re going to put up one so utterly useless. (I won’t even get into the places where two trails intersect mid-woods with no indication as to which is the continuation of the trail you are trying to follow.)

There are similar issues at the connection between the Green Bay Trail and the Robert McClory Bike Path, and there are issues throughout these maps with the way intersections between bike paths and streets are handled. For example, if you happened to be trying to get from the Robert McClory Bike Path to the Illinois Beach State Park entrance, you might think that Wadsworth Rd (marked as route A-9 here) would be a good place to get off the bike path; the intersection is portrayed identically to intersections with regular street crossings, like those with Beach Rd. and Golf Rd.:: 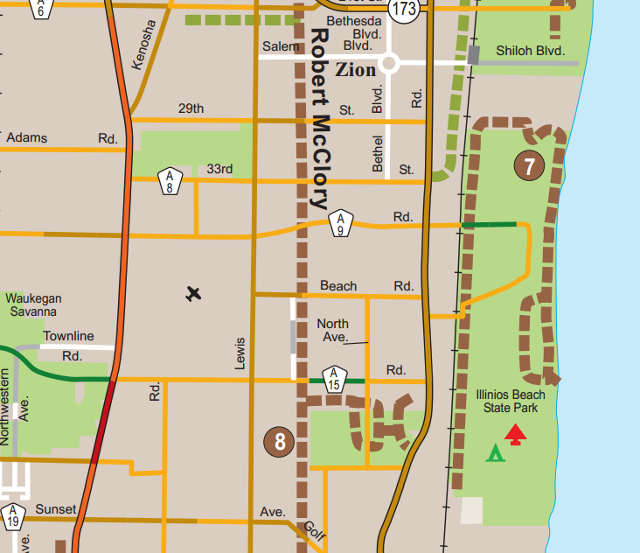 But the intersection at Wadsworth is actually very different from these other crossings; there is an overpass high above the road, and the only way to get from the trail to the road is to push your bike far enough into the undergrowth to get around the sections of chain-link fence installed to prevent you from doing so, then down a steep embankment (and through somebody’s private yard).

I am curious about the thinking behind these maps. Were they created by hard-core vehicular cyclists ideologically opposed to off-street bike paths? Recreational cyclists to whom it didn’t occur that a bike path might be a means to get somewhere, and not just a venue for there-and-back-again rides for exercise?