I Fahnestock overnight. i

The past weekend there were two groups organizing bike overnights out of New York: 718 Cyclery’s Mountain Lakes Park microtour and NYC Adventure Cycling Club’s ride to Fahnestock State Park. I vacillated until the last possible moment but ended up riding with the Adventure Cycling folks because I am lazy and their starting point was closer to my apartment (at the Queens entrance to the Queensboro Bridge).

Saturday brought nearly perfect weather, in the high 70s–the first time I’ve been in shorts this year. It was almost enough to distract me from my loathing for the North and South County Trails. (They are boring, mostly ugly, parallel busy and noisy highways for much of their length, and–when ridden northbound–present a false flat for nearly their entire length. The grade is never enough to be interesting, but just enough to sap one’s energy and will to live.)

The 718 group was riding a similar route for much of the way, and I ran into a number of micro-tour riders I knew from previous rides. I hadn’t realized my treachery would be so quickly exposed!

We left the trail in Yorktown Heights and the road turned steeply upward toward Clarence Fahnestock State Park. (The main campground is closed this year for improvements, but we had a group site a few miles away.)

Although there were 30-odd riders total, we ended up splitting into different groups along the way. The group I arrived with had plenty of daylight left, and, hot and sweaty, we went in search of a rumored swimming hole, which we found down a fire road after a few false starts. The water was numbingly cold, but deeply refreshing after the long, hot day.

As night fell, the temperature dropped. I’d known the nice weather wouldn’t last, and had packed based on early forecasts that the temperature would fall to the high forties or so. But in fact it hit the low thirties overnight, and my quilt was not sufficient; I was cold and slept poorly.

I woke up with the sun, around six, and I’d lost interest in riding back as I’d originally planned. I had brought gloves and a jacket, and maybe they’d have been enough if I’d waited a bit for the sun to warm things up, but I was eager to get home, so I rode the quick eight miles or so to Cold Spring. The ride was mostly downhill, but the few short hills at the beginning quickly convinced me I was making the right decision; the previous day had taken more out of me than I’d realized and my legs had nothing left.

A few other rides caught up with me at the Cold Spring station and we caught the 8:16 train back to Grand Central together. 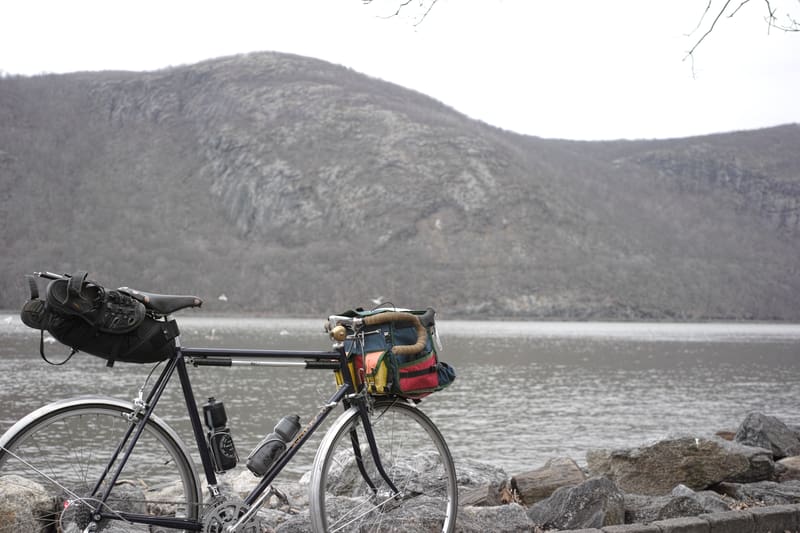