I Computer People for Peace. i 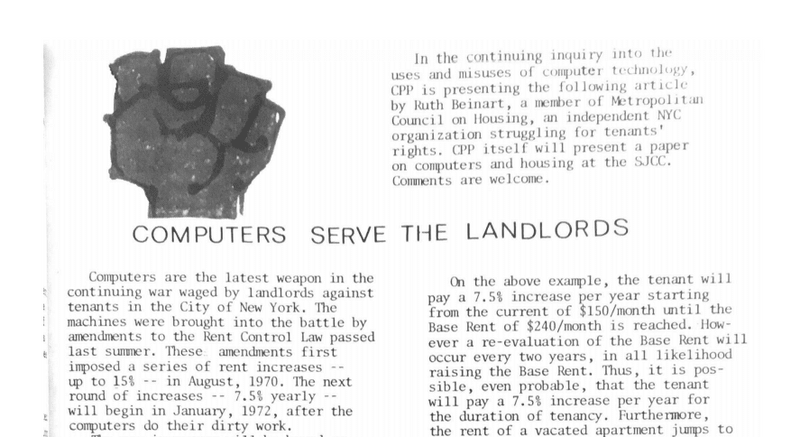 Recently The Outline published a piece on Computer People for Peace, a 1960s-1970s activist group originating in New York but with numerous chapters nationally. Some folks from the Tech Workers’ Coalition were looking for someone near one of the libraries which hold copies of the CPP’s newsletter Interrupt to scan them, and as the Tamiment at NYU is one of those libraries, I spent last Friday afternoon there.

While I haven’t had a chance to read through all of them yet, I did learn that the group originated as “Computer Professionals for Peace”; in October 1970 “Professionals” was replaced with “People” because members “felt that the ‘Professional’ label limited the potential scope of the group and smacked of elitism.” It eventually had chapters (or at least local organizing contacts) in Boston, Chicago, Detroit, Houston, Los Angeles, Philadelphia, Poughkeepsie,1 San Francisco, Washington, DC, northern New Jersey, and Southern Florida. And its editors seemed to enjoy printing letters from subscribers complaining that it was too radical.

(N.B.: Tamiment doesn’t have the whole run, only numbers 5-10 and 12-20, Jen Kagan was kind enough to scan number 20, which is now included below. I apologize for the poor-to-very-poor quality of these images; Tamiment doesn’t provide a copier or scanner which patrons can use, so I took pictures with my phone. Some came out better than others. Hopefully they’re mostly legible.)