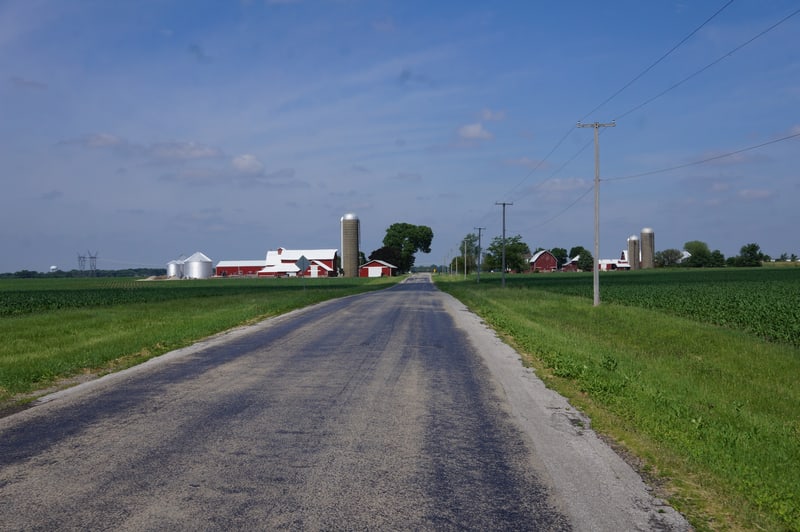 Alarm clocks, like automobiles, are mechanical devices which bring me no pleasure and thus I do what I can to avoid them in my daily existence. – Kent Peterson

I share Kent Peterson’s opinion of alarm clocks but not his ability to wake myself in the small hours, so it was to the dissonant squawk of my phone’s alarm that I awoke yesterday at 4:30–a time which would let me eat a decent breakfast before riding downtown to catch the first train to Naperville, the start (and end) of the Fox Valley Permanent.

For the past few months I’ve been riding a randonneuring bike, complete with fancy Honjo fenders, front rack/decaleur/rando bag, and a motley assortment of ancient French parts of which I am totally unworthy–and I’ve felt like a bit of a fraud, since I’d done no randonneuring whatsoever. I’d hoped to ride some of the Great Lakes Randonneurs’ brevet series this year, but between the lingering winter weather and an unexpected job search, I didn’t end up spending much time on the bike until the series was mostly over. Having done shorter local rides in the company of GLR randonneurs in the past, it was clear to me that I was in no shape to keep up. A permanent, unlike a brevet, is generally ridden solo, and I figured that if I failed, I’d have done so less publicly. So a couple weeks ago I mailed in my registration to ride the route on Saturday the 6th of June–a date which at the time seemed comfortably distant but which subsequently began to approach with alarming speed.

To make a long story short, I did manage to complete the ride (in 11 hours and 45 minutes), and I only walked up one hill.1 Outbound from Naperville to Ottawa the route was especially lovely through Fermilab and around Plano (an Amtrak-and-cycling weekend in Plano with M– is now on the calendar).

Going into the ride I knew that I wasn’t in optimal shape for this distance (my previous longest ride this year was around 60 miles), but I hoped that I was close enough to make it through, and that is more or less how it worked out. I felt very good until a few miles before Ottawa, where it turned into a bit of a slog along a lengthy, ruler-straight farm road with nothing to see but miles and miles of corn. In Ottawa I ate a sandwich and felt better, but there was a bit of a headwind coming back (which my body informs me was surely much stronger than the National Weather Service’s records indicate that it must have been) and it was a struggle to maintain much speed in the second half. (Unfortunately I managed to reset my bike computer while loading my bike onto the Metra home, so I never saw my rolling average, though perhaps that’s for the best.)

While I have some training and bike setup work to do before I attempt another ride like this, I’m glad I gave it a shot and proved to myself that I can survive this distance. I’m eager to attempt the GLR brevets next spring and I’m much more confident now about some of the more ambitious bike-camping trips I’ve been contemplating for this summer.

Thank you to route owner Eric Peterson for putting together a great route (with a reliable cue sheet) and one that starts less than a mile from a Metra station.