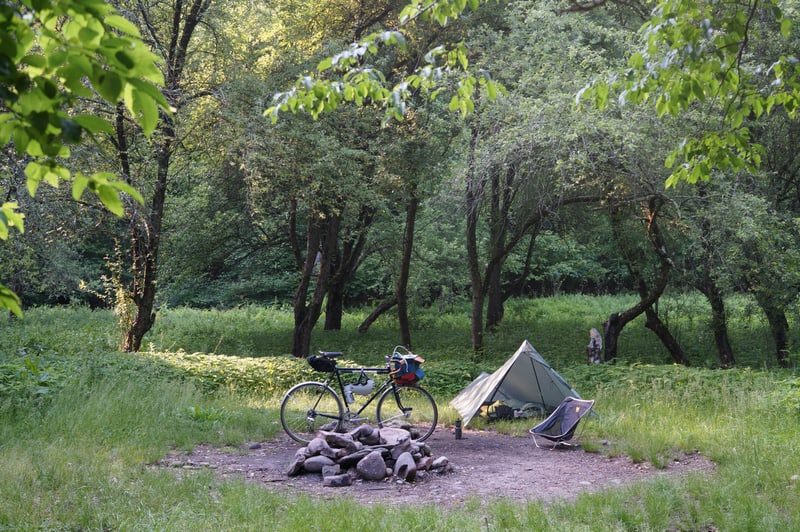 Last weekend, with M– in the city visiting friends, I took my first overnight bike trip in New York, to the Peekamoose campground in the Catskills. (M– and I camped there by car a few weeks ago.)

The ride started on an inauspicious note when I decided a few miles out that it was chillier than I’d expected, and returned home to grab an extra layer. Then it began to rain on my way out on NY 52. But by the time I got through Walden the rain had stopped, and, defying the forecast, held off for the rest of the ride.

I’d dreaded the climb over the Shawangunk Ridge, but in the end it wasn’t so bad–long and slow, but the grade was never too extreme. After a brief stop at the overlook I began the (terrifying) descent into Ellenville. (Until I moved here I never understood the desire for disc brakes on road bikes; now I get it.) 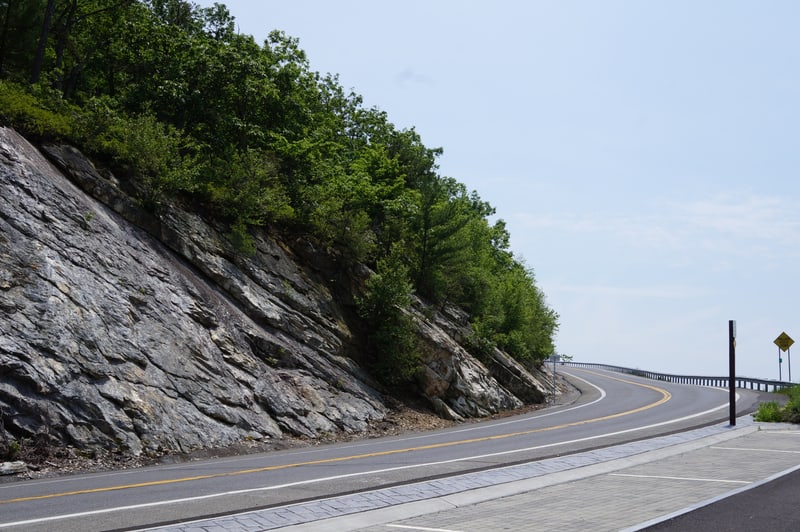 In Ellenville I stopped into Aroma Thyme, a restaurant with a terrible name and logo but great food. Fortified by beer, trout, and fancy pickles, I continued toward the campground.

After Ellenville there are no further towns to speak of and almost no services. The route climbs toward the Rondout Reservoir and then follows its northern shore along NY 55.

Soon enough I turned off onto Sundown Road, and found myself at the campground a few miles later. At Peekamoose all of the sites are primitive walk-in sites, there is no water or trash pickup, a single porta-potty, and the camping is free. The campsite M– and I stayed at a few weeks ago turned out (we discovered the next morning) not to be an approved campsite at all, fire ring notwithstanding; on this trip I saw that the rangers had destroyed the fire ring.

I found another campsite in a small clearing, a short distance from Rondout Creek (where the water is crystal-clear and, after filtering, delicious).

I was really hoping to have a fire, but I wasn’t sure how I’d manage to get firewood back to the campsite. (There wasn’t much fallen wood.) There is a tiny store a little over a mile from the campground, so I rode down and was able to fashion a small bundle of firewood with a pair of Arno straps. But how to get it back to the campsite? An ill-advised attempt to ride while carrying the bundle looped around the drops ended with firewood slamming into the front spokes (luckily without any damage), so I resigned myself to walking the bike the mile back. But at that moment a friendly couple in a pickup truck stopped and offered to carry the firewood and leave it at the campground, so I was able to ride back and still have a cheery, if brief, campfire. 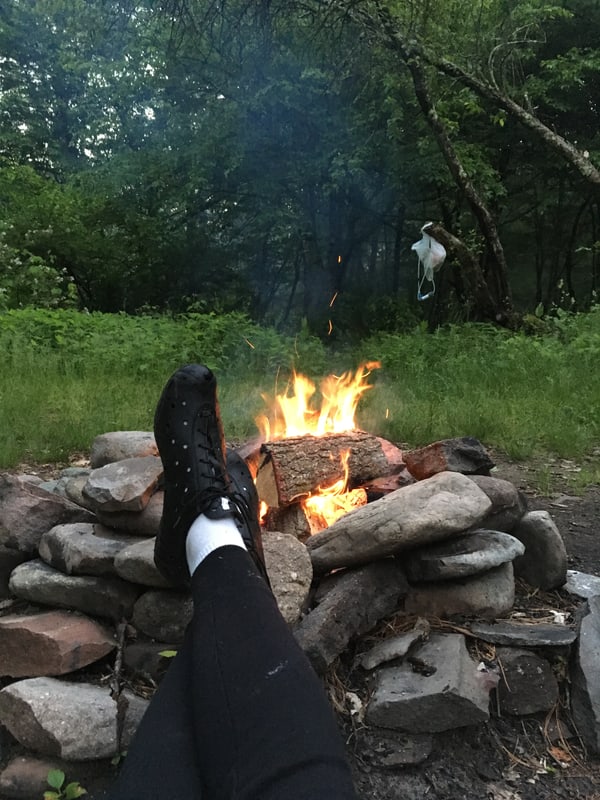 This was my first trip where I got to use all of my lightweight summer solo-trip gear together: my TarpTent ProTrail, Jacks ‘R’ Better quilt, and my trusty Thermarest NeoAir. All three fit easily into the Revelate Pika seat bag and make a great system for warm-weather camping.

My plan was to return east of the Shawangunks, so I wouldn’t have to go over the ridge a second time. I headed out around 7:30 on Peekamoose Road, past Buttermilk Falls and onto the ominously-named High Point Mountain Road, which skirts South Mountain along the edge of the Ashokan Reservoir, which is briefly visible as you pass by the Ashokan Dreams B&B.

The roads through here are beautiful and quiet, leading eventually to the Walkill Valley Rail Trail and then down over the Rosendale Trestle.

I considered stopping in Rosendale for breakfast but didn’t want to climb back up to the trail, so I opted for an energy-bar breakfast and headed home through New Paltz and then onto NY 32. Too soon I was back among the strip malls and violent drivers of suburban Orange County, where trying to hit a moving cyclist with a projectile thrown from your mammoth SUV is a favorite pastime. I was glad to reach the Newburgh city limits and was home before 1:00.