I McHenry County ramble. i 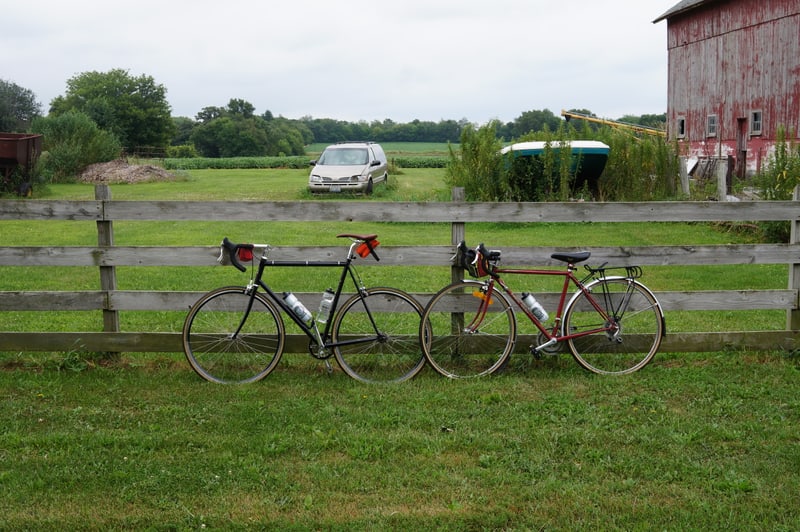 Yesterday we caught the first UP-NW northbound to Harvard at 8:48 AM at Jefferson Park–a run I’ve begun calling the Rando Express due to the proliferation of shiny fenders and boxy front bags on this first train of the weekend to the ferticle cycling-grounds of rural north-central Illinois. On this ride we shared a car with a pair of Madison-bound cyclists and admired the Swift Ozette bag one of them carried on a nice old rando’d-out Fuji Berkeley. After an abortive bike-camping attempt out of Harvard a few weeks back I’d been in a cycling funk; but M– had wanted to take her nice Trek out on some country roads and had found a route east from Harvard to Glacial Park–and so here we were.

My own rando bike was indisposed, so I’d brought my fixed-gear–not without trepidation. For boring reasons, I’d never ridden this bike, or indeed any fixed-gear bike, for more than a mile or so. I’d also never ridden clipless before–but I’d put a set of hand-me-down SPD pedals on the bike (heeding dire Internet warnings about the folly of fixed-gears without foot retention) and had just gotten SPD shoes the day before, the sum total of my clipless experience being a few runs up and down the alley behind our house and then a quick loop a few blocks in length.

But I was bound and determined to have a nice ride. And we did. Fortified by doughnuts (buttermilk for me, maple-glazed for M–) and egg-and-bacon sandwiches at Harvard Donut, which were both excellent and cheap, we set out for our turnaround point, the Grand Old Mill restaurant in Wonder Lake (chosen largely for its name).

As it turned out the bike was fine, the fixed-gear setup was fine, the pedals were fine, and even the brand-new shoes were fine. We were out of Harvard on country roads almost before we knew it and M–’s route was lovely, with plenty of barns, horses, cows, and even some nice little hills (by Illinois standards).

We were dismayed to discover that the Grand Old Mill doesn’t open until dinner on Saturdays; but there is a nice country store across the street where we bought some pickles and beef jerky and sat out front and chatted with a charity rider (we’d been seeing groups of riders heading the other direction most of our ride) on a lovely blue-and-yellow LeMond Zurich. (It turned out they were raising money for for a school in Uganda, where my sister has lived and worked for several years.)

We decided that we’d have a better chance of catching the early return train in Crystal Lake–which was a bit closer and where the train would be arriving a little later than in Harvard–so we hopped onto the Prairie Trail and made it into town with an hour to spare, enough time to enjoy some very nice beers at the Crystal Lake Brewing taproom before we headed for home.