In the event I followed this route, more or less–Harvard to Lake Geneva to Burlington to Kenosha. I went a bit out of the way to get up to Burlington so I could follow Wisconsin Highway 142 almost all the way east to Kenosha, because the Wisconsin bicycle map claims that it possesses “best conditions for bicycling” east to Highway 75 and then “moderate conditions for bicycling” east to I-94. This assessment is a bit off the mark. While the route does pass through the quite-scenic wildflower prairies of Bong State Recreation Area, it is a fairly high-volume, very high-speed (55 mph speed limit) road pretty much straight out of Burlington, with center-line rumble strips that discourage drivers from giving much room as they pass. The next time I do this ride I’ll skip Burlington and head due east from Lake Geneva instead. 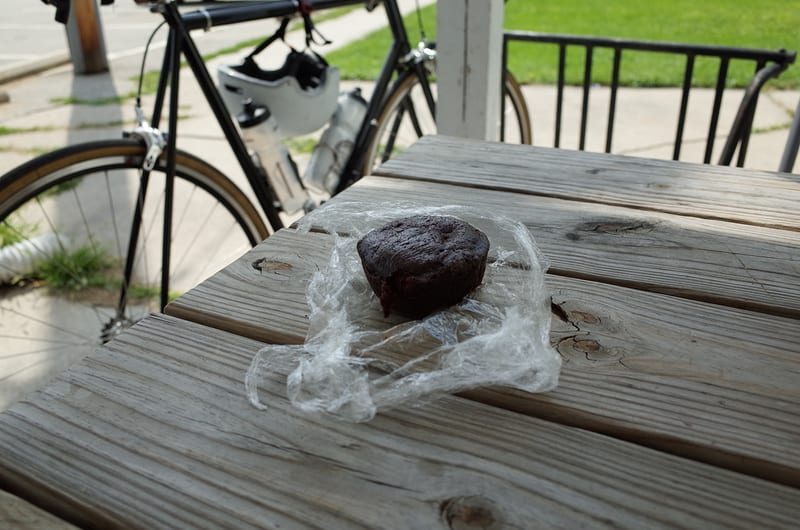 To its credit, this route did take me through Lyon, where I had for lunch a delicious chocolate-zucchini-bread muffin made with zucchini from the proprietor’s garden.

As has become my (bad) habit I took too few pictures, and none of the best parts of the ride, the rollers along Reese and Hebron Roads and then Hillside Road into Wisconsin. (The descents were especially exhilirating on a fixed gear.1)

With the help of a stiff tailwind I made it to Kenosha with plenty of time before the next (and only) train of the afternoon. A very nice session IPA at Public Craft Brewing helped the time pass quickly, and soon enough I was loading my bike onto the train alongside a glorious Raleigh Tourist, resplendent in its outfit of rod brakes and whitewall tires–next to which my scratched-up and paint-chipped plain black bike looked workaday indeed.