I The Big Marsh Freedom Ride. i 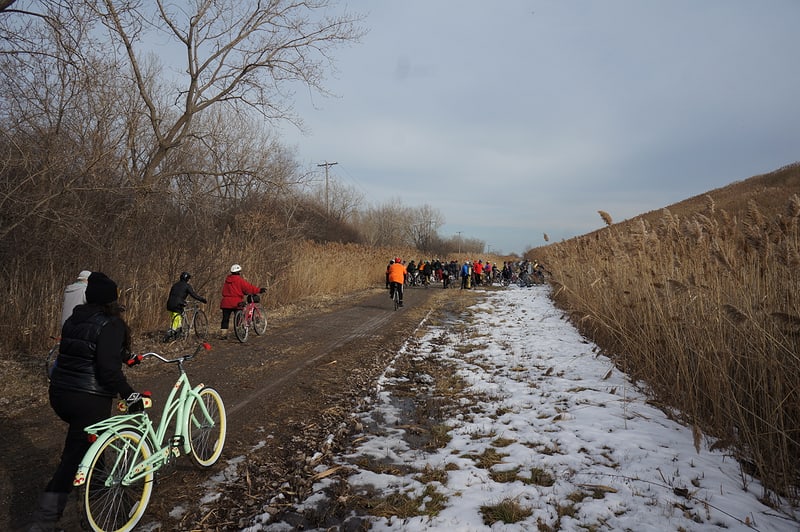 A couple of weeks ago Streetsblog Chicago published a very affecting essay by Olatunji Oboi Reed: Why I Fight: How Biking Saved My Life and Can Help Other Black Chicagoans. (As it turned out, this was the last long article published by the site before it went dormant for lack of funds.) In it, Reed talks about his experience with depression, how biking helped him to find a way to get better, and how this has spurred him to fight for equity in biking and bike facilities in the Black and lower-income neighborhoods of Chicago. I was so impressed by this piece that when I heard that Reed’s organization Slow Roll Chicago was holding a short ride to “Big Marsh” (about which more below) this Martin Luther King Jr. Day, I knew I wanted to go.

The ride started at the A. Philip Randolph Pullman Porter Museum in North Pullman, which is a bit of a hike from my home in Edgewater, and up until the last minute, I wasn’t sure if I’d ride or take the train down. But the day started out so bright and clear and warm (for January) that I really had no excuse, and in fact, it was a really pleasant ride down. I took the Lakefront Path to 31st Street (modulo a detour around the Oak Street Curve, which is closed due to snow and ice from the waves) and then King Drive all the way down to 103rd. I’d ridden segments of King Drive before, but this was the first time I’d been able to ride so much of it in one stretch; it’s really a fantastic biking street with bike lanes for most of its length and relatively little traffic. 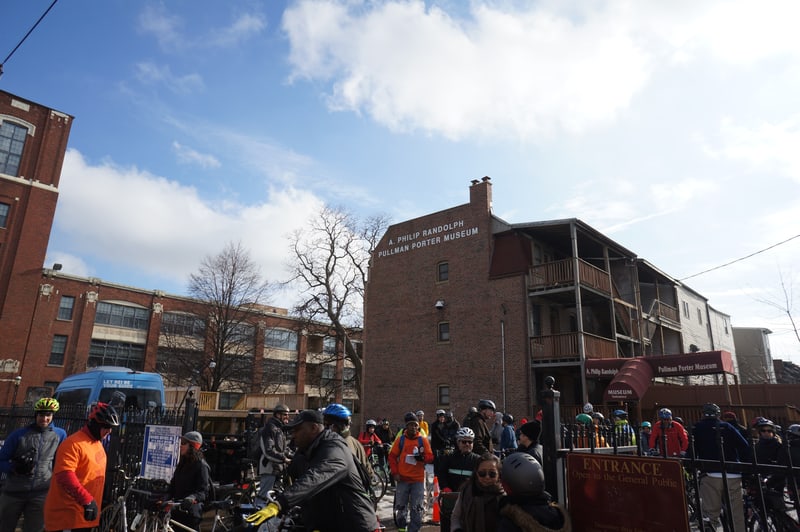 There was a pretty good turnout for a winter ride, and lots of cool bikes to look at— road bikes and fixies and old Schwinns and mountain bikes, but also a fully-dressed 650B rando bike, a fatbike, a Co-Motion tandem, a Workcycles Fr8, and a recumbent trike. After a few minutes we headed toward Big Marsh. 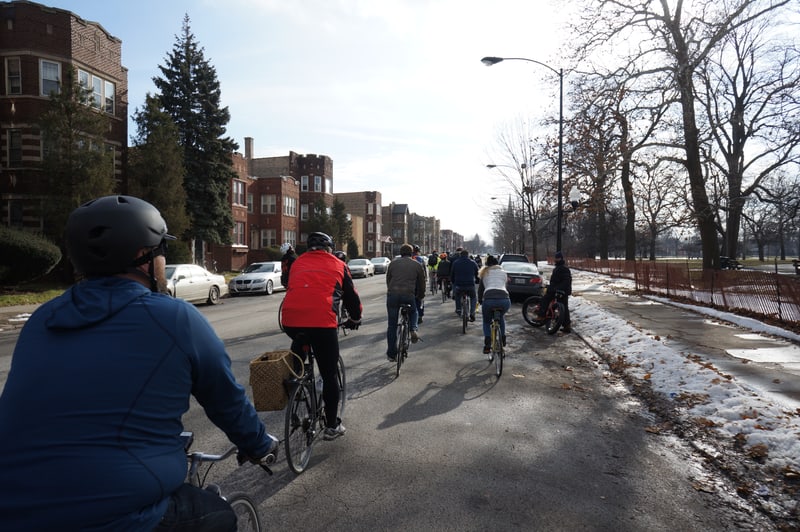 The route wandered west and then south on Michigan, and I was starting to wonder if I’d have enough time to hop into the incomparable Old Fashioned Donuts and be able to catch up with the group—but sadly we turned east just before we would have passed it, to make our way through South Pullman and then around Lake Calumet to Big Marsh. 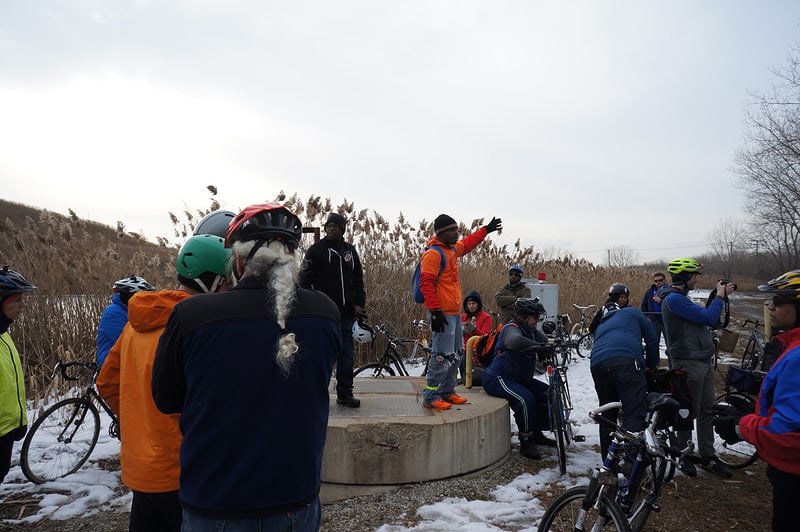 Big Marsh is the plan for Chicago Park Number 564, a swampy plot of land tucked in between Lake Calumet and the Calumet River in the heart of the industrial south side. With backing from the SRAM Cycling Fund, construction is already underway on what is intended to be a showpiece bicycle park. Slow Roll Chicago founders Oboi Reed and Jamal Julien and SRAM Cycling Fund director Randy Neufeld described the goal: mountain biking and BMX facilities for all ages and skill levels, with a multi-use path around the perimiter of the 278-acre space, and a bike path across Lake Calumet to provide access to the residential neighorhoods to the west (without having to ride on heavily-trafficked highway-type roads like 103rd, as we’d done). 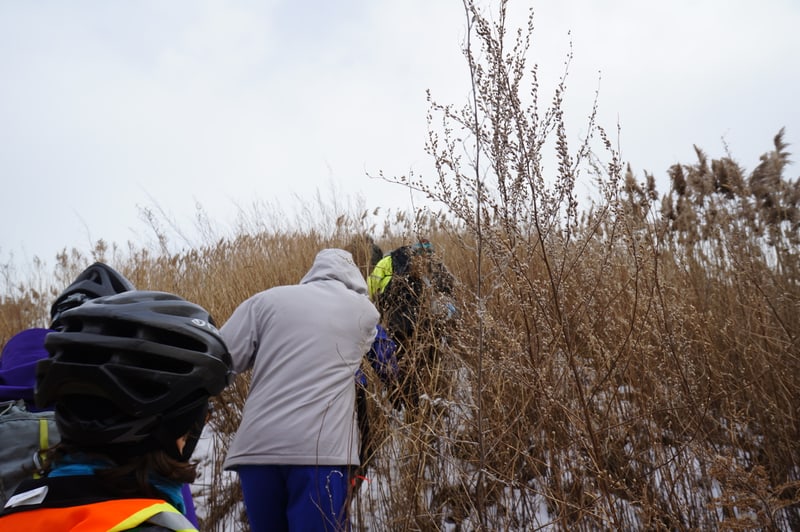 We made our way to the top of the landfill just south of the park site, where you can see it expanding out to the north, with the downtown skyline in the background: 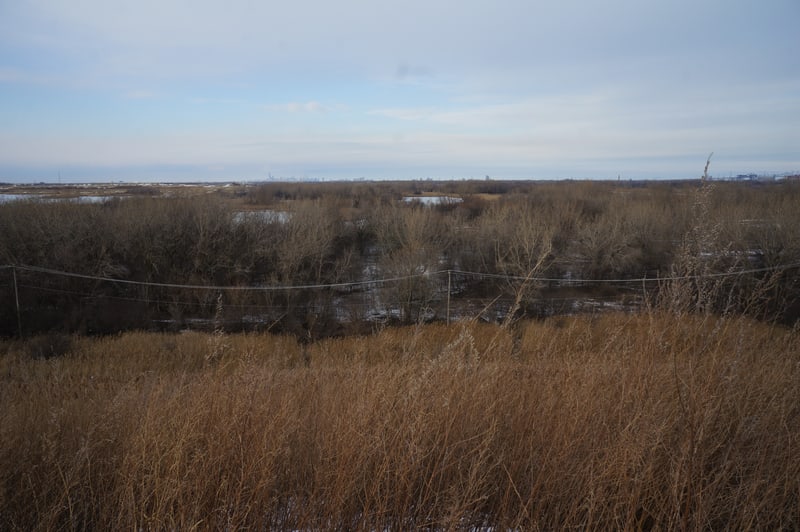 We even surprised a herd of deer on the south side of the rise! 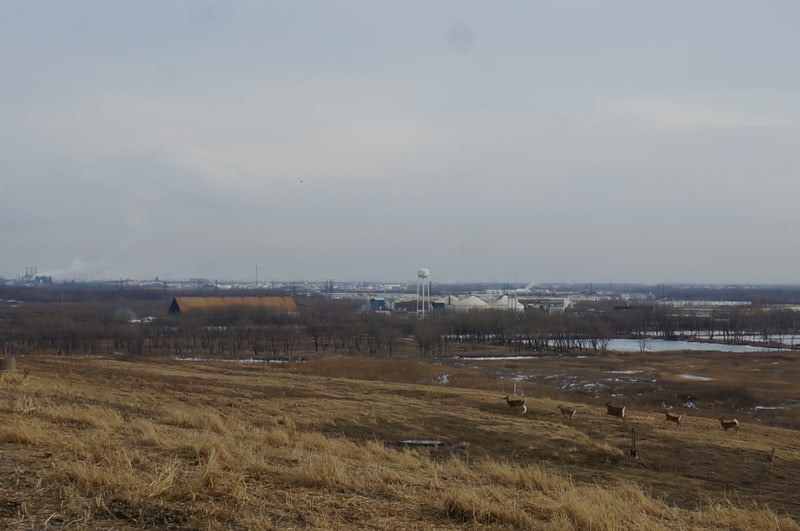 Eventually we headed back down to the muddy access road where we’d left our bikes. 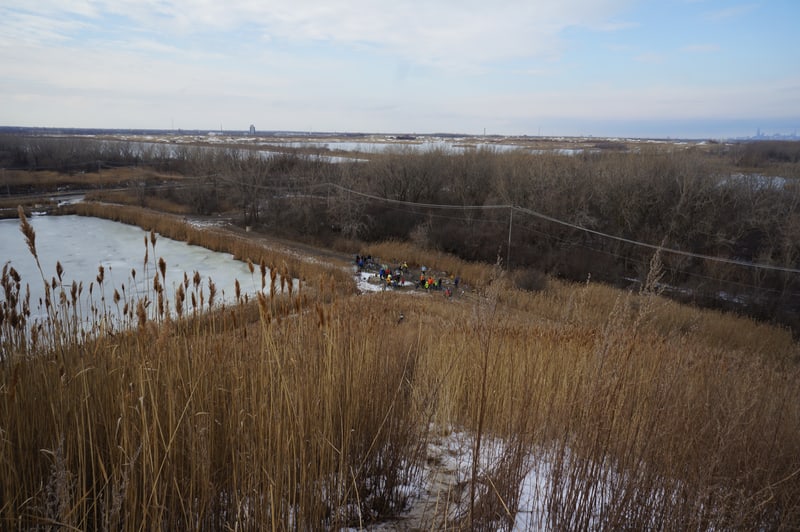 Then it was back to the museum, and, for me, a grayer, chillier ride home to Edgewater. I’d ridden 22 miles each way to go on a 10-mile bike ride, and I can’t think of any better way to have spent the day. 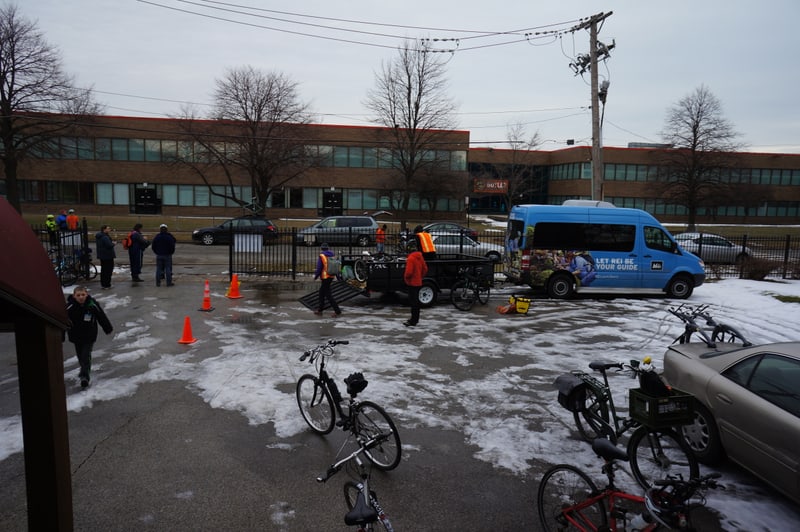