I Touring the Catskills with 718 Cyclery. i

This post is now several months old because I’ve been both busy and lazy, but I’m posting it belatedly as I try to work through my backlog of subject matter.

When I signed up for 718 Cyclery’s annual Catskills tour we hadn’t nailed down a date for our move from Newburgh to Queens–in the event, I left on our third day in the new apartment, leaving a very understanding M– alone with piles of boxes. 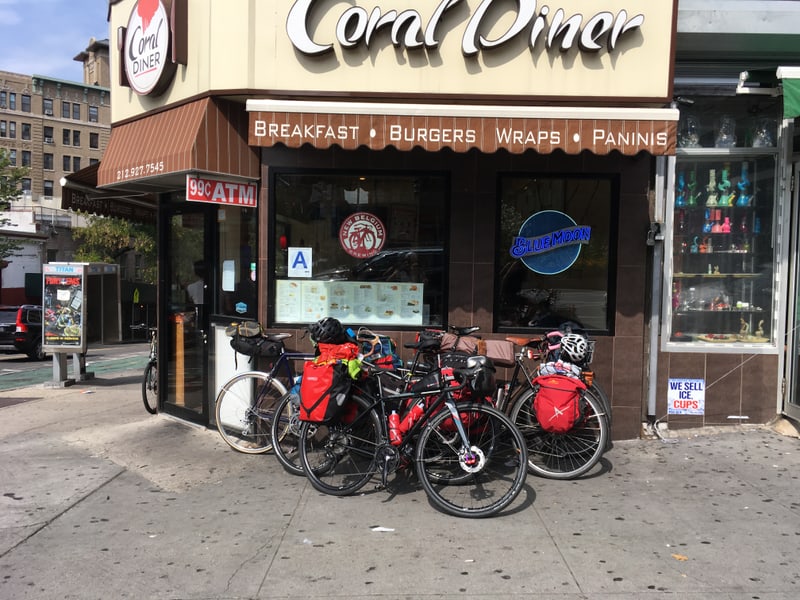 I met up with the group on the Upper West Side on an unseasonably warm Tuesday morning. At six days this would be the longest tour I’d done, and I wasn’t sure I’d packed enough clothing. I really started to worry when the other riders were visibly surprised by how lightly I’d packed. After a quick breakfast in Washington Heights we continued across the bridge toward the Palisades and eventually to Beaver Pond Campground in Harriman State Park. The last couple miles were gruelingly uphill on Willow Grove Road; fortunately we’d stopped for ice cream at the bottom. 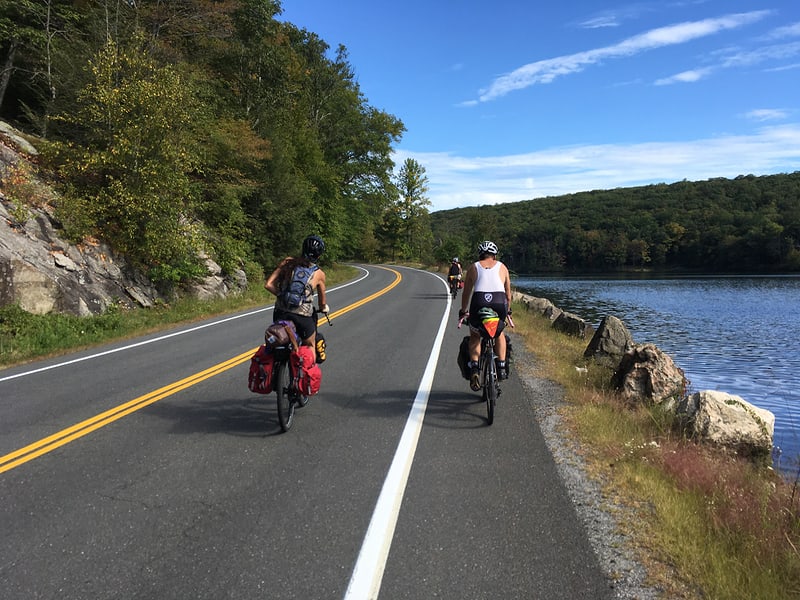 Rolling out of Beaver Pond, we took a gorgeous, swoopy detour along Seven Lakes and Arden Valley Roads to visit a small mountain lake, where the leaves were just beginning to change. Duly refreshed, we headed north through Goshen toward the day’s destination: Sam Pryor Campground at Minnewaska State Park, and no less importantly, the famous Mountain Brauhaus. Many of these roads through western Orange County were familiar to me, since we were only a bit west of Newburgh, and I proposed bypassing the unpaved (and often very muddy and overgrown) Walkill-to-Gardiner segment of the Walkill Valley Rail Trail on (what I remembered as) nice low-key gravel farm roads. When we got there, however, it turned out that those roads were in fact on the grounds of the Shawangunk prison and not open to the public (I’d previously accessed them through through intersections with the rail trail where no signs were posted), so we ended up on Sand Hill Road instead–which itself had some nice views of the ridge we’d be crossing the following day. 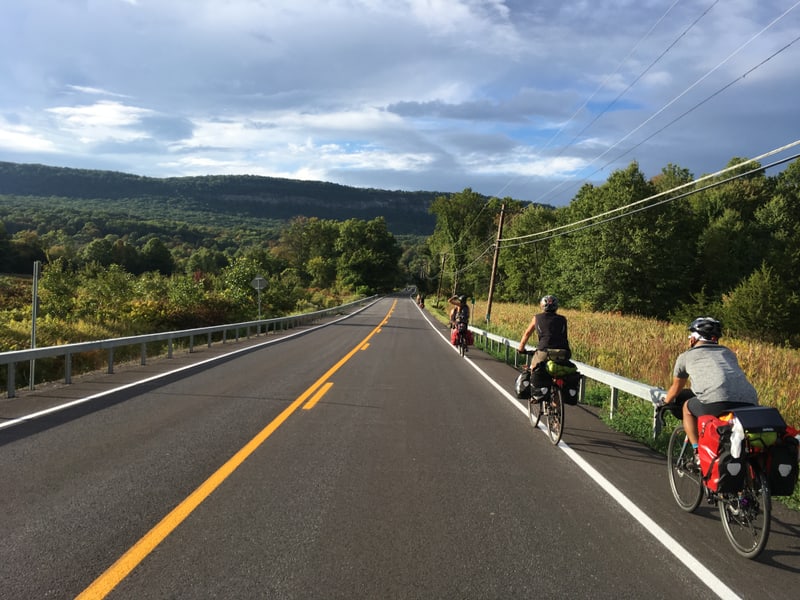 We rolled out of Gardiner at the golden hour, reaching the campground with just enough time to get set up and take a shower before heading to the Brauhaus, where I gorged on veal schnitzel.

M– and I had often discussed camping at Sam Pryor during our time in Newburgh (it was only about 20 miles from our house there). I’d been a bit sad that we’d never made it, until this trip. The campground–which is run for New York State by the American Alpine Club–is clearly intended for climbers, and only climbers. Although the campground is nearly brand-new and the buildings are quite nice, I’ve never been to so off-putting a campground. The sites are tiny and crowded together. The showers cost $3 for 4 minutes, take only quarters, and there are no change machines within many miles (luckily we knew this in advance and came prepared). No fires are allowed, except at the “communal” firepit, which is right next to a massive concrete slab lit up with klieg lights that stay on until 9:47 pm (the specificity of this time is not elaborated upon by the printer-paper sign announcing the policy). 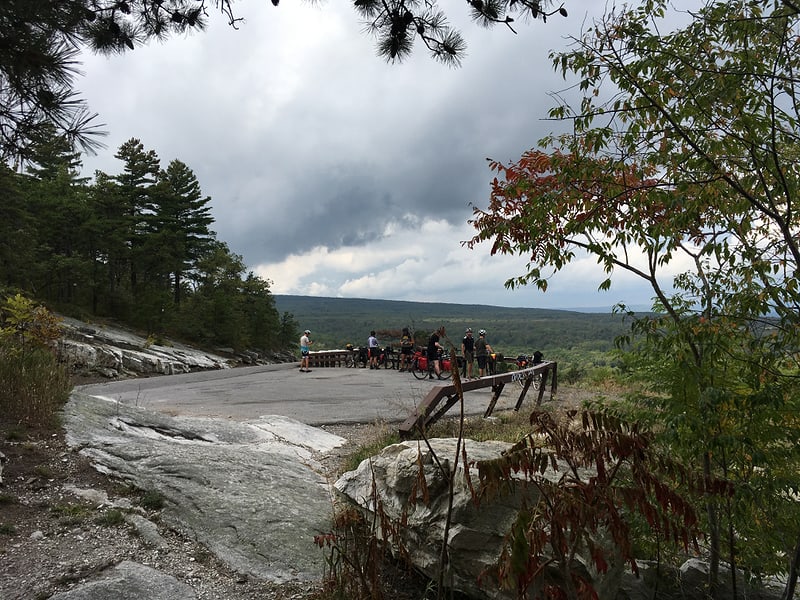 A campground that does not inspire one to linger facilitates an early start. At any rate, we needed one to meet Joe (718 Cyclery’s owner) at the inexplicably-named Mountain Harbor Deli for excellent breakfast sandwiches, after which he planned to chronicle our suffering on the climb over the Shawangunk Ridge–with a drone. (In fact, it wasn’t that bad; I’ve now crossed the Gunks via State Route 52 near Ellenville, via Ferguson Road near Roosa Gap State Forest, and via Mamakating Road out of Wurtsboro, and this climb along US 44/NY 55 felt like the easiest of the bunch, though I don’t know how the grades compare.) He managed to get a little footage, but a light rain and heavy mist limited visibility. 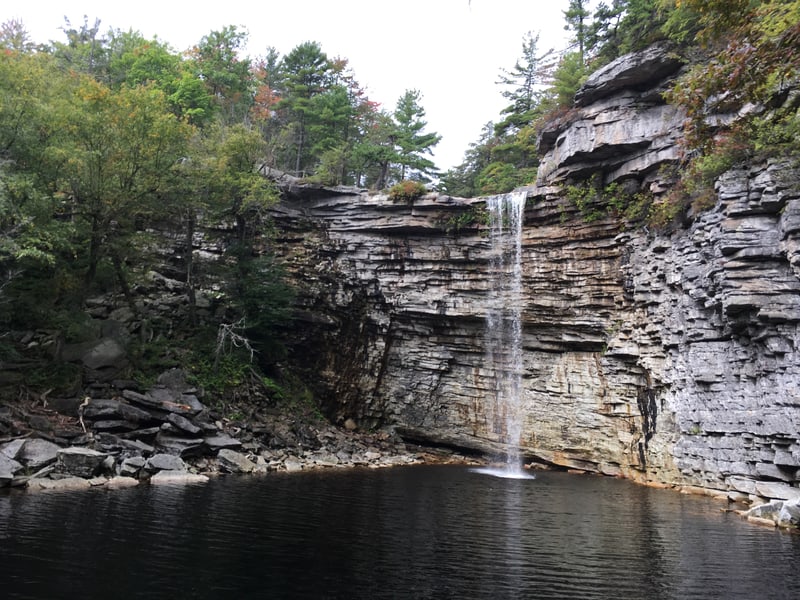 Pretty quickly we left the highway on the old carriage road which leads to Awosting Falls, where we took a short break. After returning to the pavement, we began an exhilirating descent which eventually put us in Napanoch. As far as any of us could tell, the only things in Napanoch are the Eastern and Ulster Correctional Facilities and a Walmart Supercenter–our destination, as it was the only place to buy dinner supplies on the way to the night’s destination, the Peekamoose campground at Sundown Wild Forest.

A steep climb out of Napanoch let us out on 55 a bit east of the Rondout Reservoir–familiar to me from my Peekamoose overnight last summer–which we soon passed. 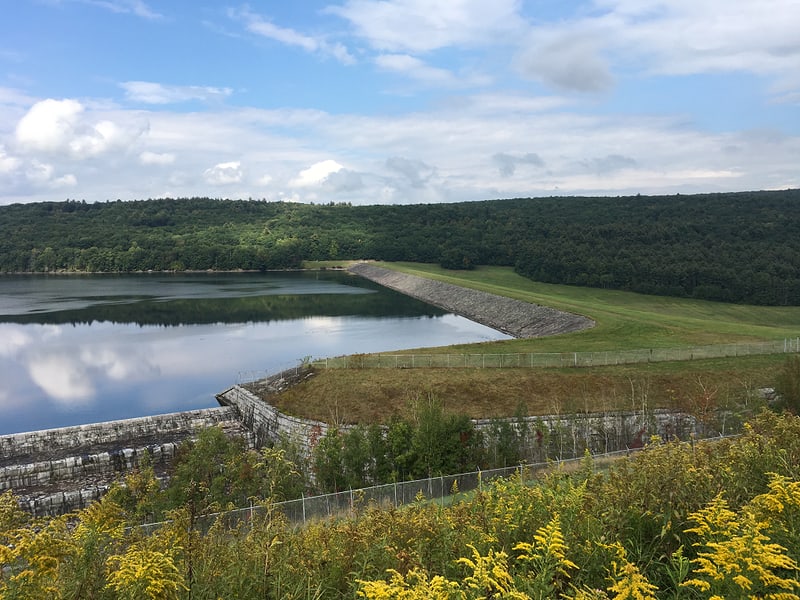 During a food stop at the Grahamsville Deli, we got the first of the rain that would follow us the rest of our trip. We spent a while hoping to wait it out before giving in and heading off for Peekamoose in the rain. It would continue to rain throughout the night, turning our campsites into a muddy mess. Fortunately we’d picked up a bundle of firewood in Grahamsville and then a bit more in Sundown (where the bait-and-camp-store was unexpectedly open even though it was mid-week after Labor Day), so we had a fire at one of the more sheltered campsites. 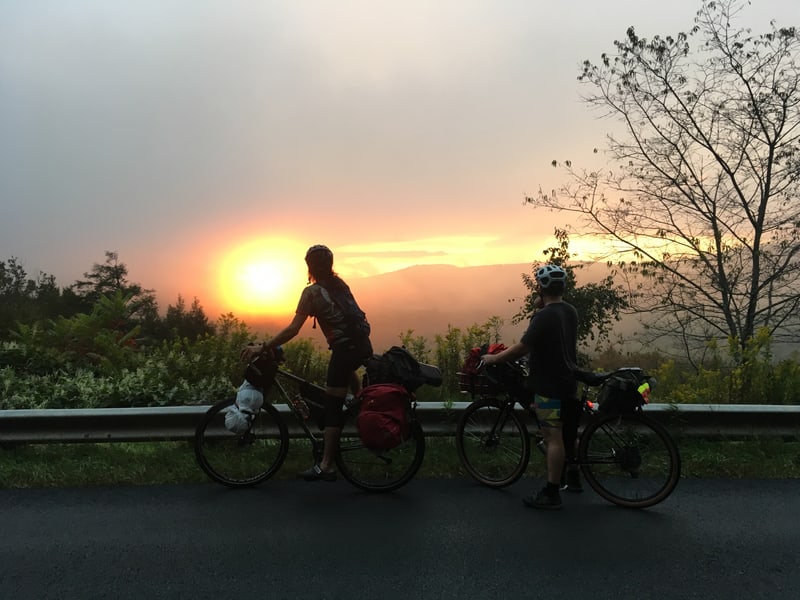 Friday was, for me, the most difficult day of the tour. It dawned bright and clear, and I was hoping for the sunny weather to hold so that I’d be able to dry my tent and clothes. We got a late start, but no one worried much–this was supposed to be the lowest-mileage day. We rode back through Sundown, and at the intersection of Sundown Road and NY 55A, we took a left onto 55A, passing the reservoir again in the opposite direction from the day before. I didn’t bother to check the cue sheets I’d printed out, since some of the other riders had GPS units, but this turned out to be the wrong turn. Fortunately, we discovered this before descending into Ellenville, but it added 15-20 miles to our ride, and by the time we made it back to the intersection to rejoin the planned route, it was nearly 1pm.

A few minutes later, it began to rain. Once again, we sheltered for a bit at the Grahamsville Deli, waiting for the rain to pass, and it did lighten after a bit. We had a couple hours’ respite–though it remained far too misty and overcast for anything to dry–before the rain came back in earnest during our second and last food stop.

Wet and (at least in my case) a bit demoralized, we rolled on. (None of us had had any cell service to speak of since Napanoch or so, so we had no way of knowing how long the rain was forecast to last.) Eventually the rain stopped again; while we and our gear were all soaked, at least we wouldn’t be camping in a downpour a second night. We passed through Livingston Manor as it became increasingly clear that we weren’t going to make our campsite (at Little Pond Campground) before sunset–so much for our short day! But the dusk gave me a chance to try out my new Edelux II headlight/Velogical rim dynamo combination in earnest on the really lovely roads leading to the campground. And at one point in the last few miles, a small black bear crossed our path only a dozen yards ahead! It was a sight to wake up the tiredest rider and good motivation for the grueling final climb up the campground access road. We set up camp in the dark (making doubly sure to hang all of our food) and feasted on barbecue heated up over the fire. 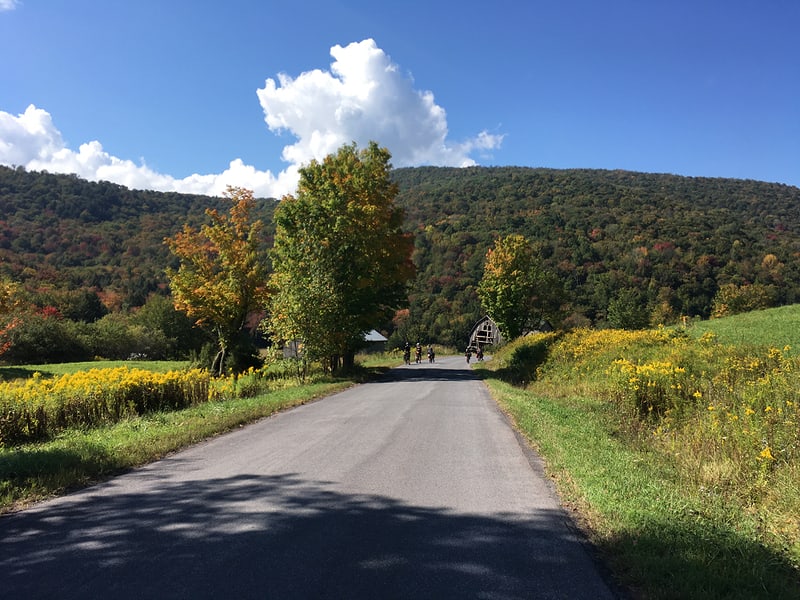 A few months earlier I’d visited Little Pond Campground with M–, driving up and riding back to Newburgh. Today we headed out in the opposite direction, deeper into the Catskills on the steep and scenic Barkaboom Road, then east along Pepacton Reservoir toward the next night’s stop, Kenneth Wilson Campground near the Slide Mountain Wilderness. We had mostly beautiful weather, interrupted by a heavy downpour at mid-morning which had me worried about camping in the rain again–but this time it lasted only a few minutes.

We enjoyed a meal at the famous Phoenicia Diner and then rolled into camp. Only a single campsite had been reserved, the rangers wouldn’t let all of us share it, and no other campsites were available, so we had a scary moment when we thought we’d have to find another campground (something my legs didn’t really have in them)–but fortunately we were able to get a second site in the end. (I later saw that the site next to mine had five cars, five massive family-size tents, and a dozen or more people–but as always, the rangers seem to delight in applying one rule to drivers and another to cyclists.)

On the last day the group was heading to Poughkeepsie to take the train back to the city, but I had to head to Newburgh to help M–. She was meeting a staffer from the Hudson River Maritime Museum, who was driving down to pick up the little wooden catboat that we’d decided to donate when we moved to the city. I said goodbye to the others and headed out early, arriving at our old Newburgh house with just enough time to shower and change. It was sad to see our boat go, but I knew it would be in good hands at the museum, where they run a wooden boatbuilding school which has handled the recent restorations of the Hudson River sloop Clearwater as well as the Beacon Sloop Club’s Woody Guthrie. Afterward I loaded my hard-used bike into the back of M–’s car and we headed back home to Queens.