I Metra-cycling—Crystal Lake to Aurora. i 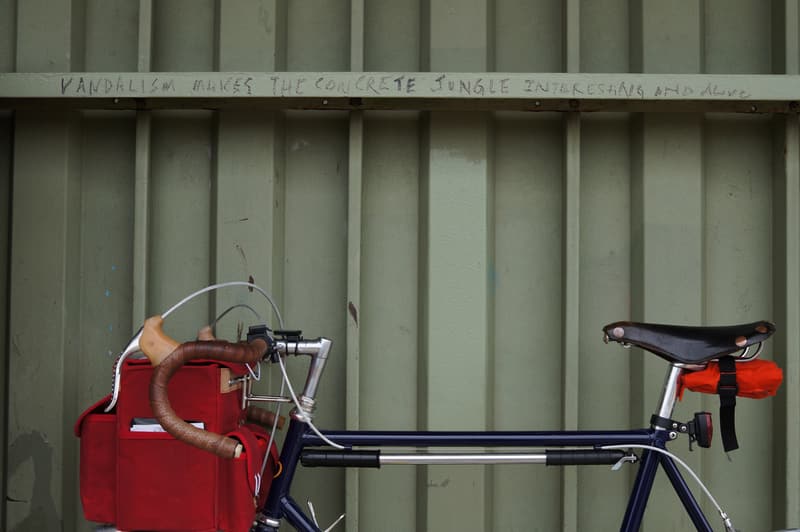 I find myself more and more eager to get out of the city these days to ride. And since there’s only so many times you can head up Sheridan Road, that has meant lots of Metra rides. Last week I rode out-and-back north from the Crystal Lake station to Richmond near the Wisconsin border along McHenry County’s Prairie Trail. But while I was waiting for the train home a local told me that next time I should head south for more scenic riding. So yesterday I did, taking the Prairie Trail to Algonquin and then the Fox River Trail down to Aurora. It was also a chance to test my brand-new, locally-made rando bag (in revolutionary red!1) from David Banzer of Treetop Bags–which replaces an Ostrich bag that self-destructed on last week’s ride (its first). 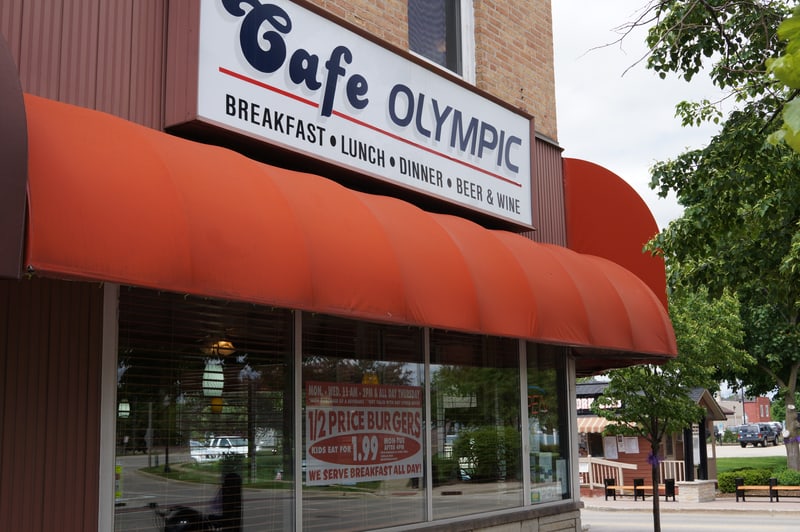 But first I grabbed lunch at the Cafe Olympic just west of the Crystal Lake Metra. The $10 Mediterranean chicken lunch special was vastly more enjoyable than my eventual dinner at a self-styled “gastropub” in Aurora at twice the price. I can’t recommend this place enough. 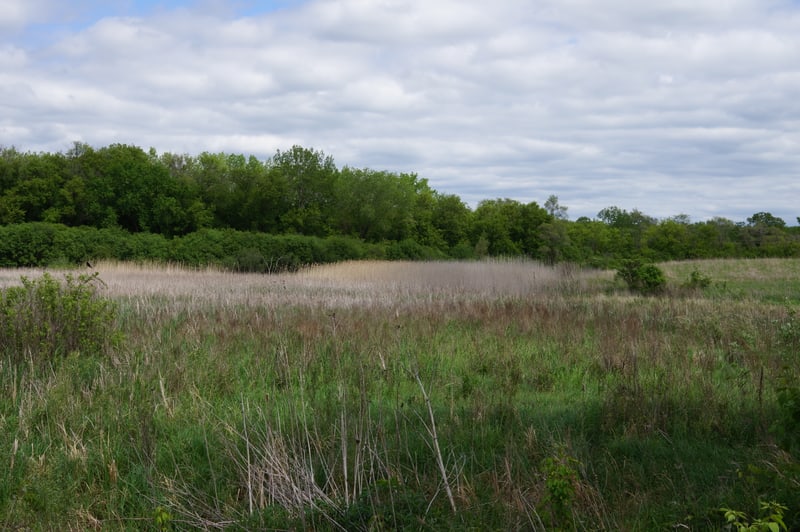 Getting out of Crystal Lake was a little hairy due to construction interrupting the trail, but once I was out of town it became very nice, passing through conservation areas like Larsen Prairie (above). 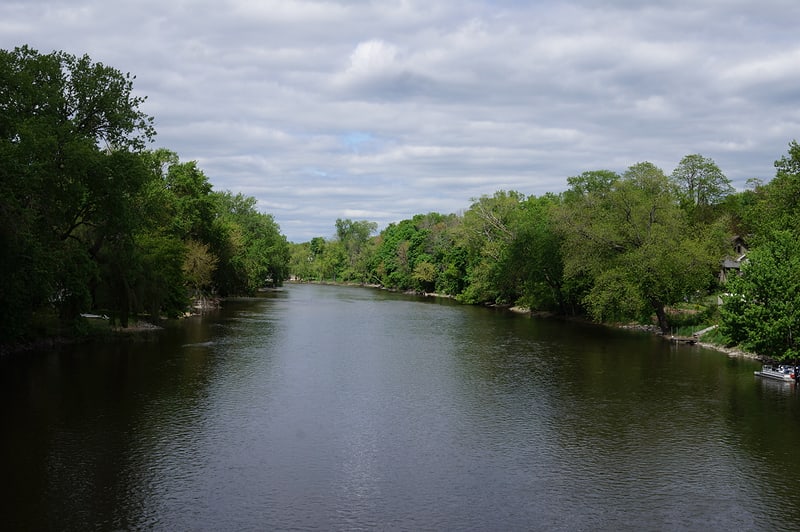 Among the highlights of this route are the numerous river crossings. It’s interesting to see the character of the river and surrounding development change as you head from the more rural northern areas to the more developed suburbs to the south. 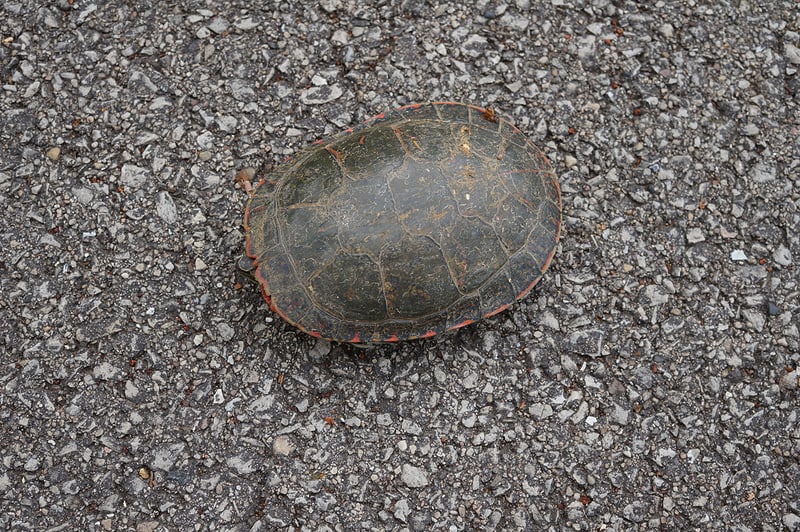 This painted turtle was trundling along the bike path. I moved him to the side so that he wouldn’t get crunched (having just read an account of a turtle rescue by bicycle which stressed turtles’ visual orientation, I took care to keep him pointed in the same direction). 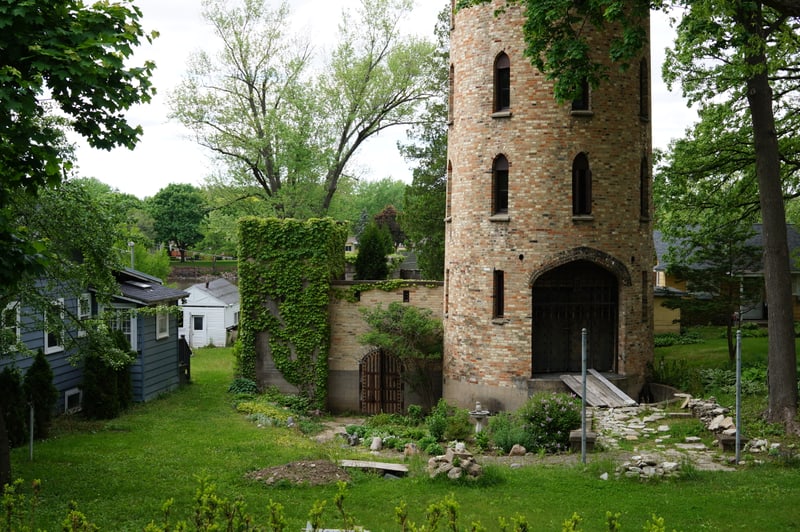 As you come into Elgin you pass by Pratt Castle, the work of a local eccentric obsessed with the Middle Ages, now grown even more authentic as it has fallen into disrepair. (Will it surprise anyone to learn that the builder was an electrical engineer? I suspect it will not.) 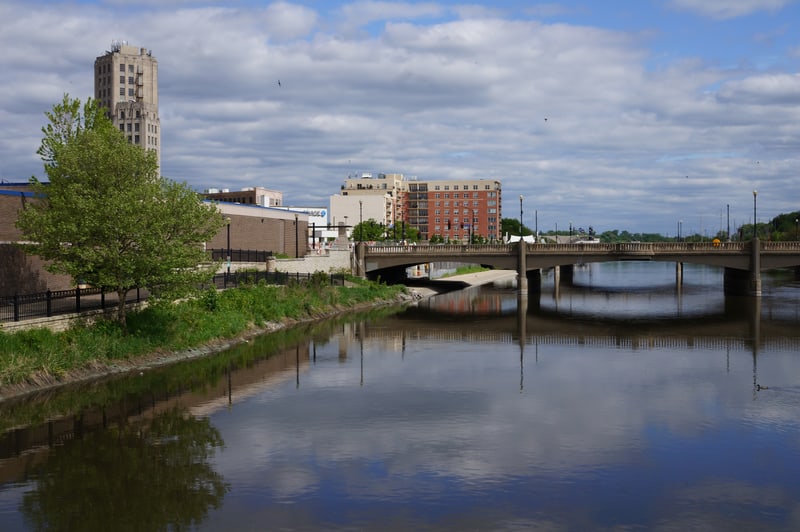 In downtown Elgin you can take a path out to two man-made islands in the river, from which there are nice views of the city. If you look closely, you’ll see the sign that says that the Fox River Trail continues up at street level (I believe you’re supposed to take a right onto the pictured bridge.) I foolishly ignored this sign, went under the bridge, and ended up on a spur of the Illinois Prairie Path. Normally this wouldn’t have been a problem, since there is a connector back onto the Fox River Trail a bit south of here, but it’s closed for construction through November, so I had to backtrack a bit into South Elgin and cross the river on State Street. 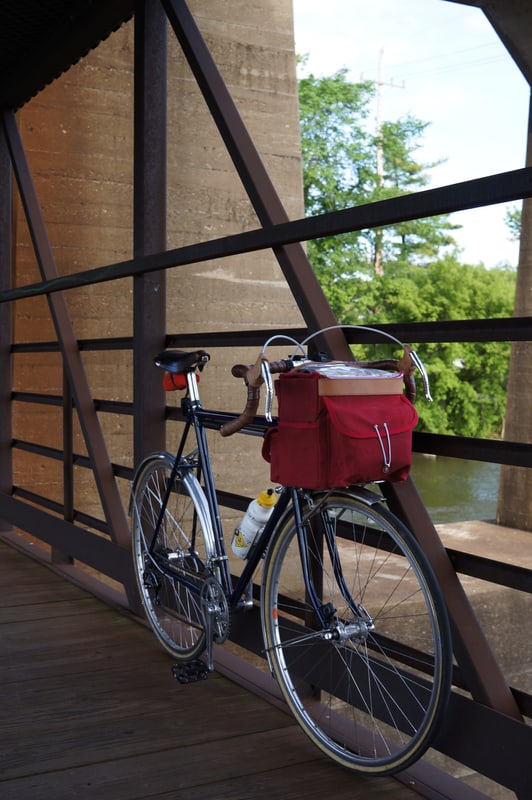 The Fox River Trail, for much of its length, is actually two trails, one on either side of the river, and beneath many of the (car) bridges which span it are separate pedestrian/bike bridges (like this one) connecting them. This is much more pleasant than the usual approach of sticking a bike lane (if even that) along the side of a busy and heavily-trafficked bridge. 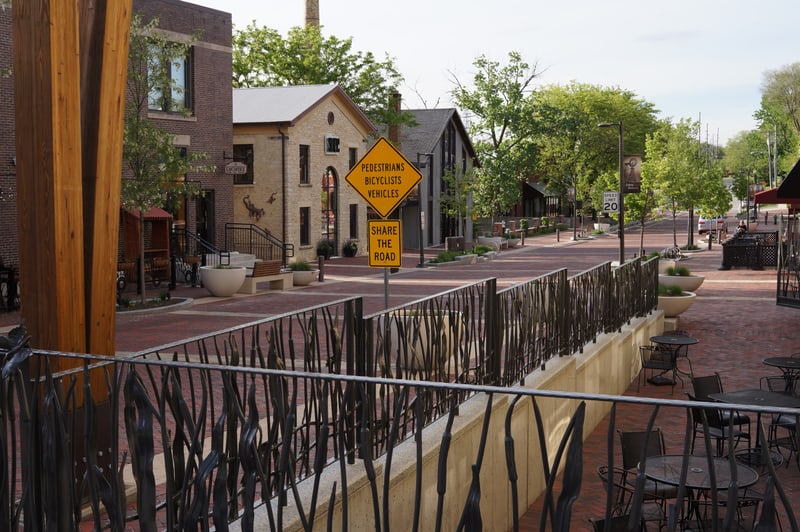 In Batavia I was delighted to come across this woonerf, which I’d read about in Streetsblog but had forgotten was on my route. Chicago is planning a similar treatment–in which pedestrians, cyclists, and drivers all share the same space–for a few blocks of Argyle Street near my apartment, so it was interesting to see this in action. (Though as you can see from my picture, there wasn’t much pedestrian activity when I was there. Argyle is much livelier and perhaps better suited for this street style.) 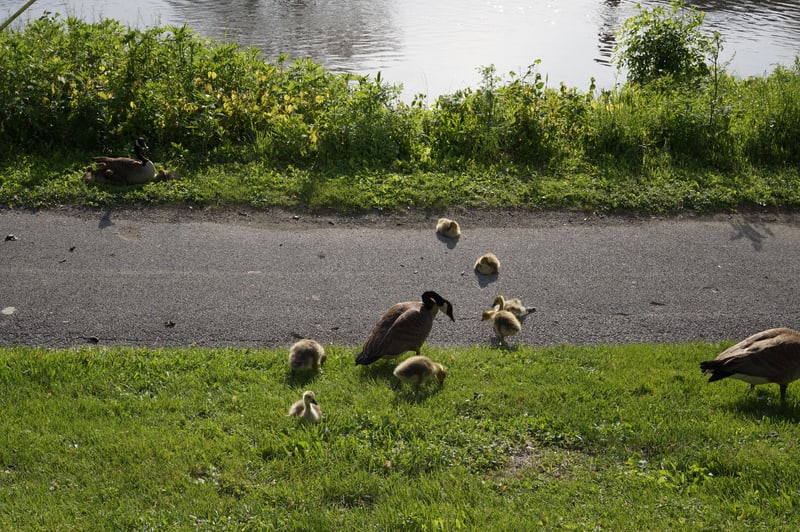 On the way out of Batavia I ran into several families of geese who’d decided to settle on the trail, the parents hissing at me in defense of their goslings as I passed by. If I were a gosling, I think I’d prefer the nice soft grass adjacent to the trail–but what do I know.

I arrived in Aurora a bit too late for the 6:20 train and, since the next wasn’t until 8:20 and I was famished, grabbed a beer and dinner at the Two Brothers Roundhouse brewpub at the Metra station. (Of course, I had to choose the Prairie Path Ale.) Thus fortified I boarded the train and settled in with The Wizard and the Volcano from the always-excellent Deca journalists’ cooperative. I was home before I knew it.