I Winter solstice bike overnight. i

Since a snowy trip to Vernooy Falls last month, I’d been looking forward to NYC Adventure Cycling’s last trip of the year, to Harriman. But last Saturday morning, when I rode out to meet the group, the weather was nastier than predicted–cold, steady rain, with colder and heavier rain predicted. This is my least favorite weather for camping, and I wasn’t really dressed to stay dry on the bike either. So I bailed before I’d made it ten blocks.

I was determined to get one more trip in before the end of the year, and this past weekend was my last shot. There was heavy rain Thursday and Friday, but the weekend looked clear, so I made plans for a short solo trip to Ferncliff Forest.

A long train ride to the start in Wassaic–the end of the Metro-North Harlem line, in far eastern Dutchess County a few miles from the Connecticut border–meant that, on the day after the winter solstice, I didn’t have a lot of daylight to work with. So my planned route was a short one, only thirty miles.

Although in my time living in Newburgh I’d ridden quite a bit in the southwestern part of Dutchess County around Beacon, and although my family has a long history in the county (on both sides) and I grew up visiting the area, this part of it was largely new to me. I was pleased to discover how lovely these roads were. Many were dirt–a bit muddy after the rain of the preceding few days, and thus slower going–but I wasn’t in a hurry, and they were nearly traffic-free. 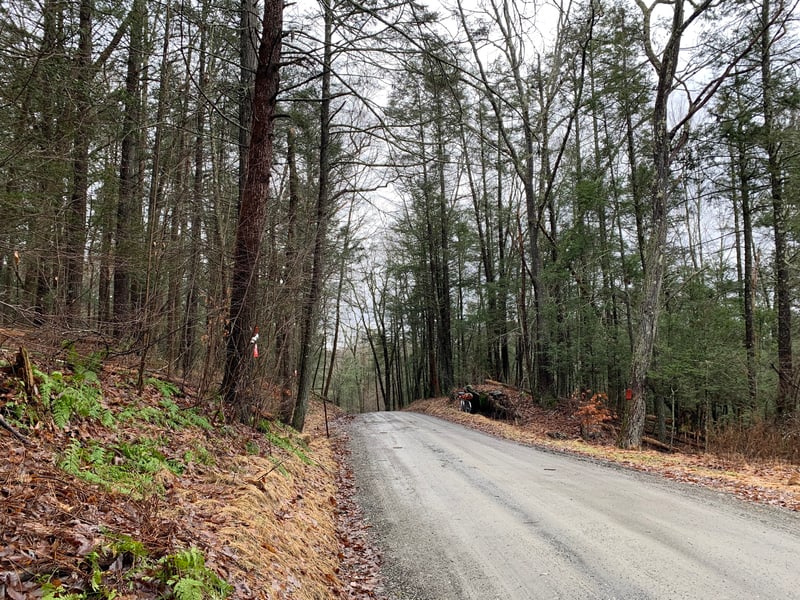 In Bangall, I stopped to take a photo of the soon-to-open Bangallworks coworking space–nicely situated on the banks of a little creek (perhaps an old mill building?). The owner saw me and came out of his house (across the street) to chat. It’s been interesting to see the rise of these spaces in small Hudson Valley towns as more people are able to telecommute part- or full-time. 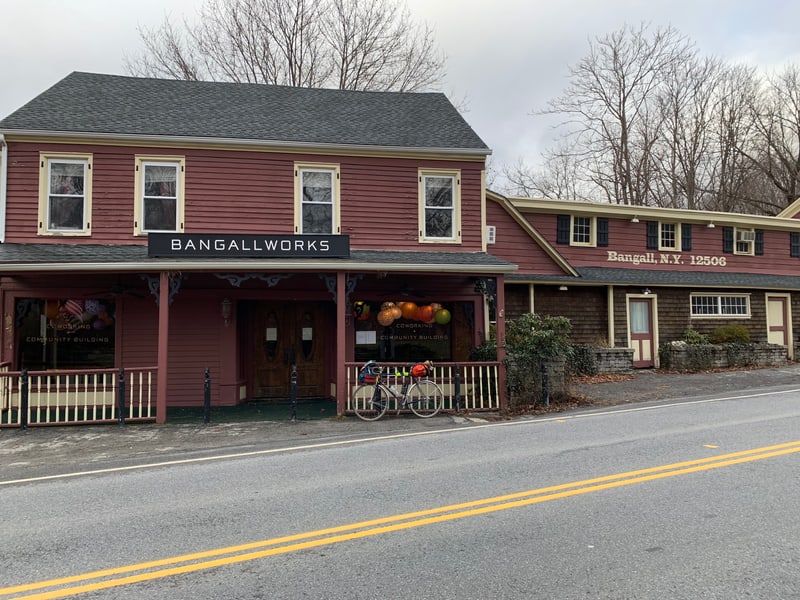 A little further on a horse watched me take a picture from its barn. 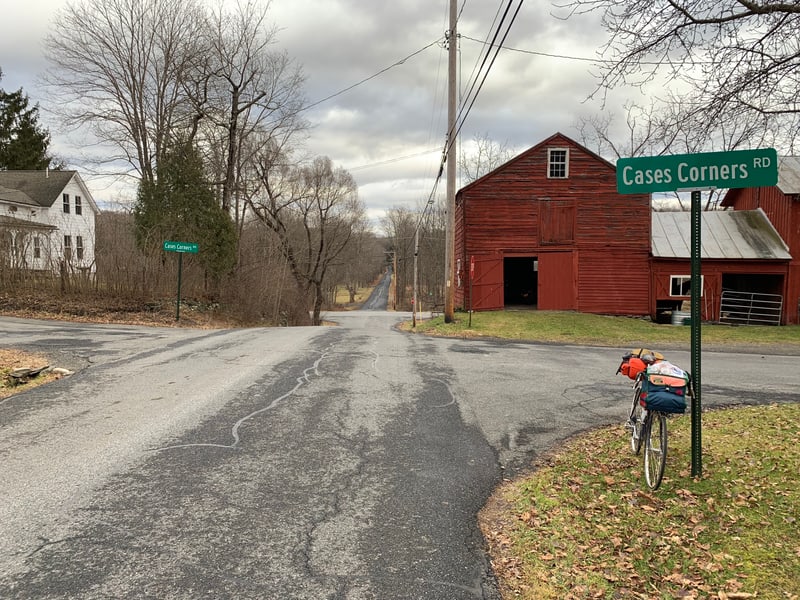 Then, at mile 22, a little bit before my planned dinner stop in downtown Rhinebeck, I heard a sproinging sound. I’d broken a spoke. 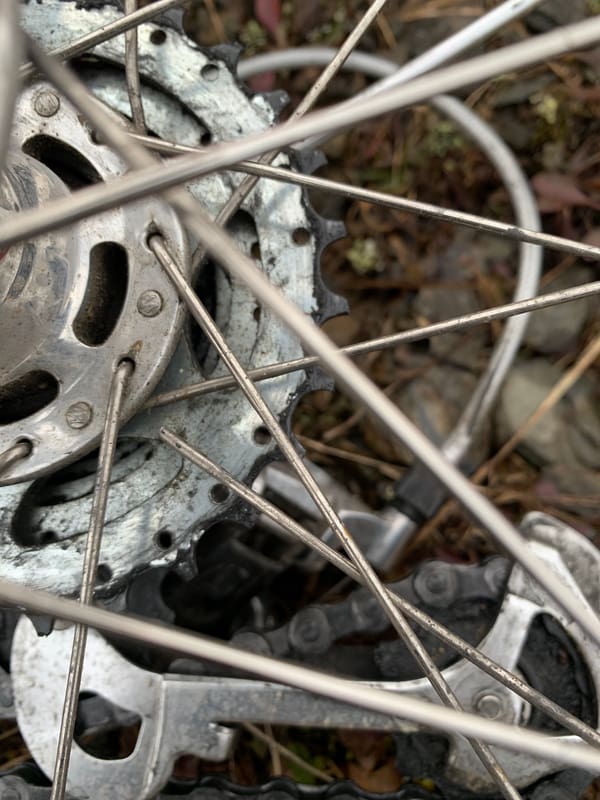 I’ve never broken a spoke before this, but for years I have carried a FiberFix emergency replacement spoke. I attempted to use it: 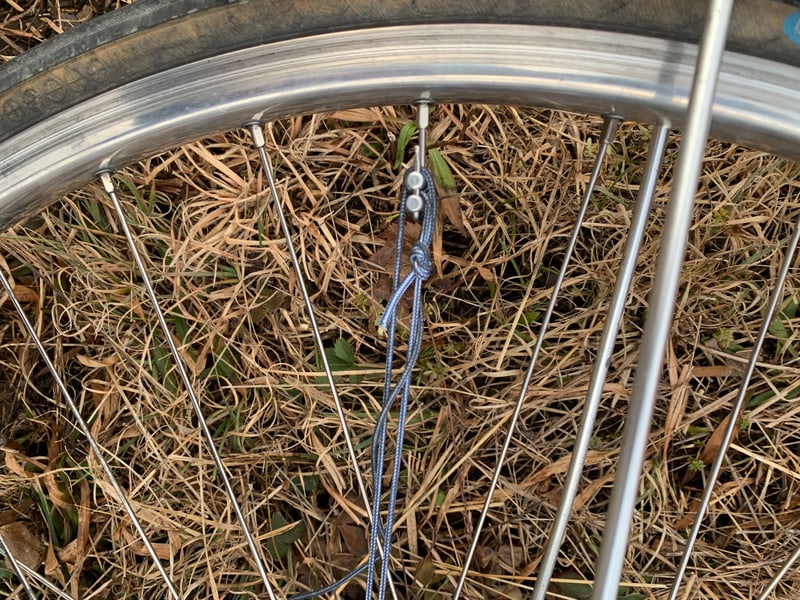 Unfortunately, even after starting over several times, I was not able to get enough tension in the FiberFix spoke to pull the wheel back into true. Eventually, I overtightened the FiberFix so far that the metal part went back up through the spoke nipple, through my rim tape, and into my tube, puncturing it. I took that as my sign to call it a day. The sun was starting to set, I was cold and hungry, and I’d been fighting with the FiberFix for most of an hour. I managed to find a friendly Lyft driver who was able to take me to Breakway Cycles, about nine miles from where I broke down. Thankfully they were still open and fully-equipped for wheelbuilding.

While my wheel was being repaired I ended up chatting with another customer at the shop who told me that she visited Ferncliff almost daily to walk her dog. She gave me tips on specific campsites and trails–very helpful, since I’d forgotten to print out a trail map beforehand!

I’d originally hoped to reach my campsite in daylight, but by the time my wheel was repaired, it was fully dark. I grabbed a quick dinner at the Chinese restaurant next to the bike shop and then pedaled the few remaining miles to the forest.

Ferncliff reminded me more than anything of the “town forests” of Vermont–small (at 200 acres–about the size of Inwood Hill Park in Manhattan) and close to town (the center of Rhinebeck is two miles away), but wild and scenic. Once the property of the Astor family, it is now a private game refuge and forest preserve, bills itself as “the second-best old growth forest in the Hudson Valley,” and is open open year-round for hiking and primitive camping.

Since it was dark and the ground was muddy, I decided not to bother with my tent and spread my sleeping pad and bag in one of the lean-to shelters along the trail. In late December I had my choice of campsites; I chose one right along the shore of a small pond.

There was some wood left at the site from previous campers, and I gathered some fallen sticks to serve as kindling, but I wasn’t able to get a fire going–perhaps because the kindling was wet from the rain, perhaps because I’m not much good at building fires. For the rest of the night I sat in my sleeping bag reading (Mary Gaitskill’s excellent The Mare, set mostly in Rhinebeck!) and sipping whiskey under the full moon until it was time to sleep.

I love tent camping, but waking up with a clear view of the pond and woods was really something. I might have to try cowboy camping more often. 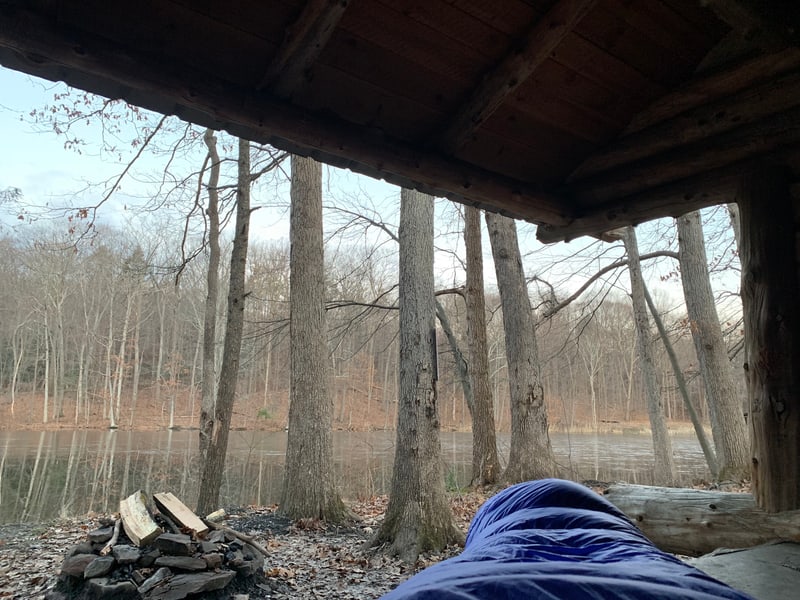 My original plan had been to hike to the observation tower Saturday afternoon, but since I’d arrived after dark, I waited till the morning. It was only a short hike from the lean-to, and offered incredible views of the Catskills across the river to the west. 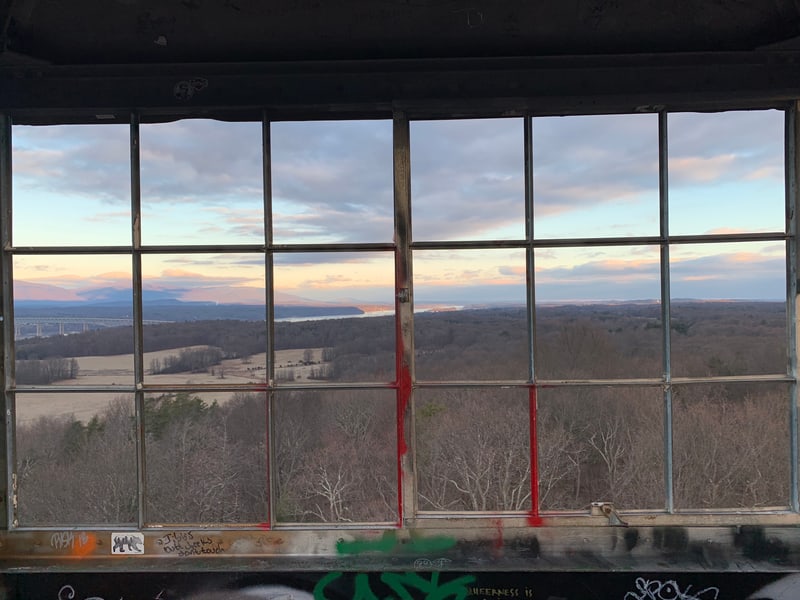 After the hike I packed up and headed the few miles into Rhinebeck to Pete’s Famous Restaurant for eggs, bacon, toast, hash browns, orange juice, and coffee. Then I headed toward Poughkeepsie, where I’d catch the train home.

The only other time I’d ridden through this area (in May on a 200k permanent), our route stayed on NY Route 9 from Rhinebeck to Poughkeepsie–a busy road with fast traffic, and not particularly scenic. For this trip, I’d plotted a route on back roads for most of the way, and again I was pleased with how nice these roads turned out to be. 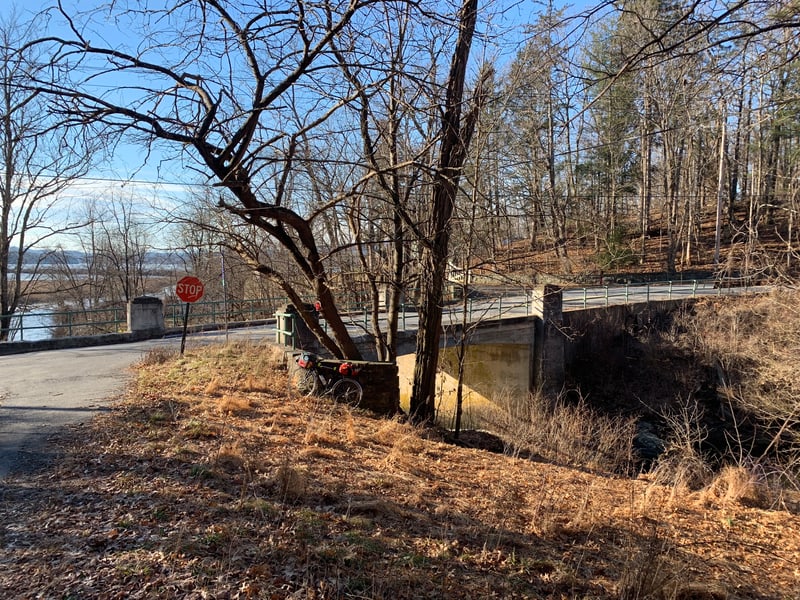 On this leg I had my second and final mechanical of the trip: 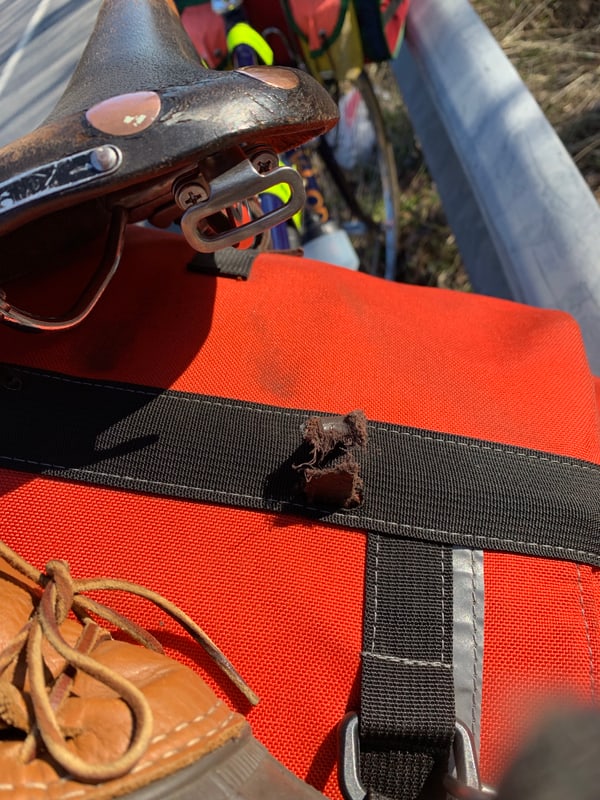 One of the leather straps holding my saddlebag to my saddle failed, leaving it hanging askew (naturally, this happened as I was making a left turn across traffic on one of the very few high-traffic sections of the route). I try to carry a couple Arno straps on all my overnight bike trips, and I was able to use one to secure the saddle bag loop to one of the D-rings on the saddlebag. Earlier this year at the Philly Bike Expo I spoke with one of the guys from Swift Industries, who made this bag; he told me that in 2019 they will move away from using leather straps to nylon, which I hope will be more secure.

I took the Dutchess Rail Trail the last mile or so into Poughkeepsie, then had time to relax with some hot tea in the train station before catching the 12:46pm train back to the city. Maybe I’m biased (after all, tomorrow I’ll take the train back up to Poughkeepsie to visit my grandmother in nearby Pleasant Valley for Christmas), but in my opinion this is one of the nicest parts of the Hudson Valley, with some of the best riding, and I had a great time on this trip despite the broken spoke.