I Another Peekamoose overnight. i 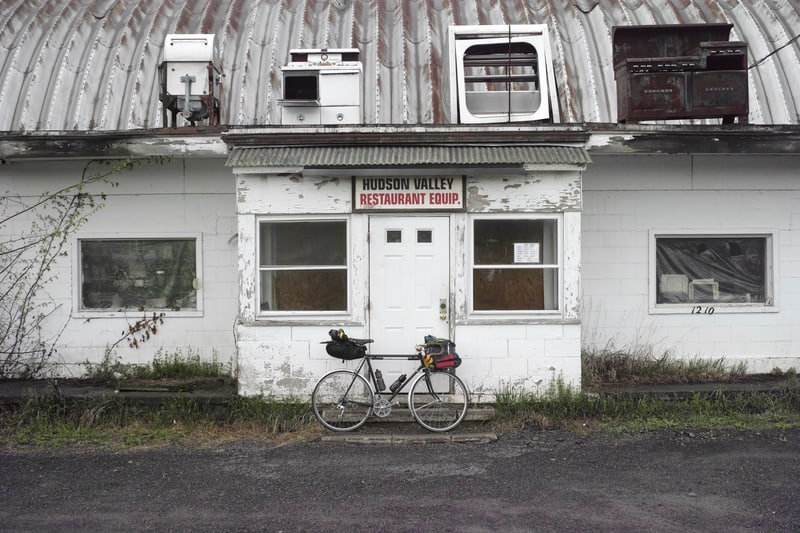 I’ve enjoyed my last few bike-camping trips with 718 Cyclery and the NYC Adventure Cycling Club, but I hadn’t done a solo trip for what felt like a long time. I’d missed the feeling of being out in the woods by myself: reading by the fire, feeling the quiet settle in. So when a weather window coincided with a free weekend, I packed my gear for another overnight at Peekamoose in the Sundown Wild Forest.

This was my fourth time camping there; I’d gone once with M– by car, once by myself, and on the Catskills tour with 718 last fall we spent a (very, very wet) night at Peekamoose Lower Field. Since it’s no longer practical for me to ride there from my door as I could when we lived in Newburgh, I took the 8:45 am train from Grand Central to Poughkeepsie and began my trip on the Walkway over the Hudson.

I thought I’d change things up a little on this trip and planned my route so that I’d arrive at the campsite from the north, instead of the south as I’ve done in the past. I pretty quickly made it up to Rosendale and then continued north, passing the impressive lime kilns from the region’s cement industry heyday. 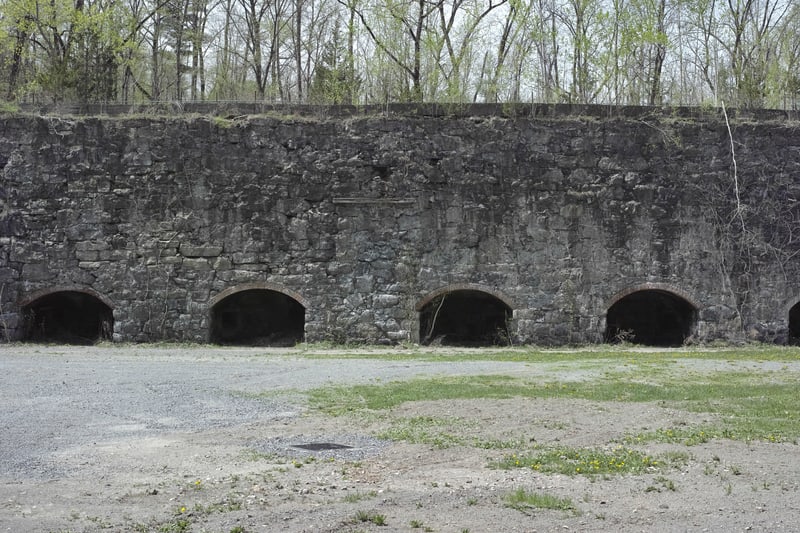 I stopped in Stone Bridge for some snacks and groceries for dinner, at the Davenport Farms stand and then a nearby supermarket. (Later in the ride I’d pass the Davenport farm itself, on Hurley Mountain Road.) Normally I try to wait to buy dinner supplies until near the end of the ride, to avoid carrying heavy groceries further than necessary, but this was the last real store I’d pass; there would be no services to speak of for the next forty-plus miles!

I’d chosen a less direct route that went further northeast than necessary, then cut back on the interesting-looking Stone Road. This turned out to be a charming dirt track with a 10mph speed limit: 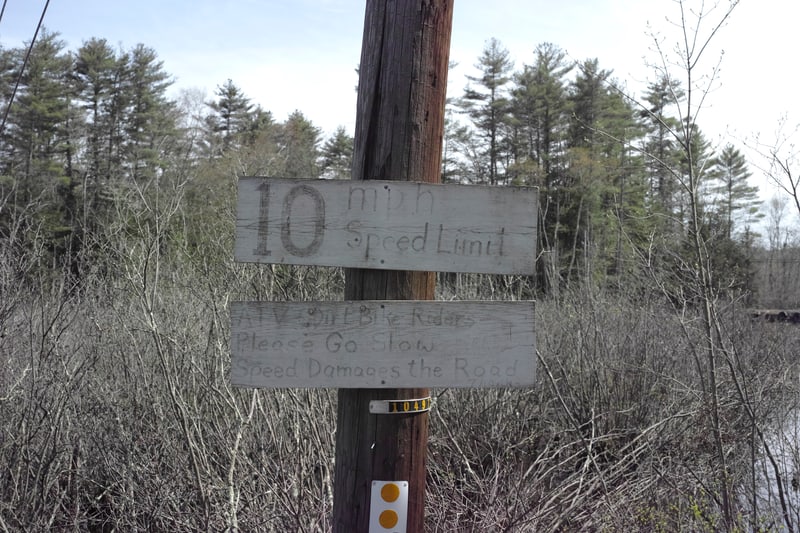 Later, though, I encountered an excavator operator who was none too pleased by my passage; beyond him the road turned private. I couldn’t stomach backtracking to NY-28, so I took my chances; the private section ended up being very sort, and soon enough I was back on the public (and paved) Quarry Road. Next time, I’ll bypass this whole section (and cut off some mileage) by taking Ashokan Road from Hurley Mountain Road all the way to Beaverkill Road.

The highlight of this northern approach was the stretch along the Ashokan Reservoir, where you can ride along the dam itself (closed to cars, but open to bikes and pedestrians). I’d never ridden here before; the views were stunning. 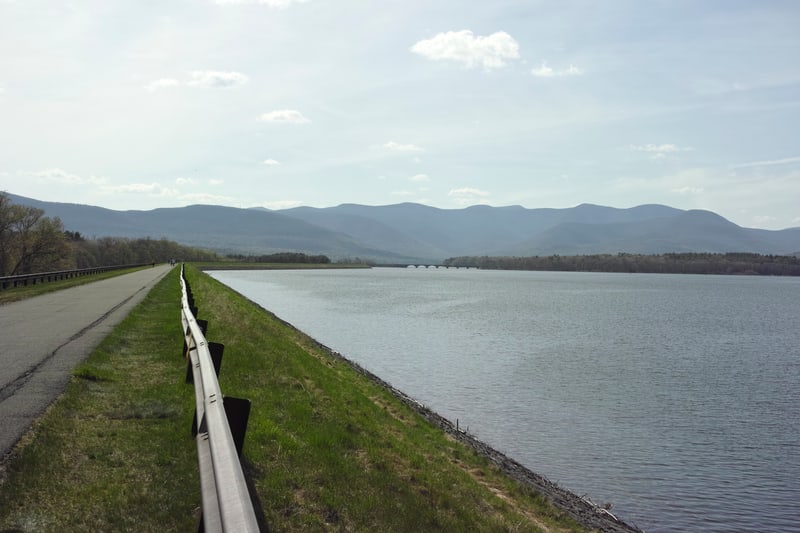 Ironically, I was running low on water. Because there is no faucet at Peekamoose, I’d brought my Platypus GravityWorks filter; I dug it out of my bag and refilled both bottles from a stream. Then I was on High Point Mountain Road, which I’d ridden before in the other direction two years ago. On that ride, I’d noticed the Ashokan Dreams B&B perched dramatically far above the reservoir; it seems the neighbors found it less charming than I did, and this road is now festooned with signs complaining about the weddings held at the B&B.

A little earlier on that 2016 ride, I’d experienced a truly vertiginous descent along Peekamoose Road; this time, going the other direction, it would be a terrifying climb. I will confess: I walked the whole thing. I didn’t even bother shifting into the little ring of my triple. There was no point; I wasn’t fooling anyone; I was not going to make it up that climb on two wheels, sixty miles into my day with a full camping load.

When at least I reached the top (the hill seemed endless) I got back on the bike and enjoyed the descent the rest of the way to the campsite. I set up camp and was too tired even to ride the mile or two ahead to the little camp store in Sundown (which is only irregularly open anyway) for firewood, so I made a fire with fallen branches, boiled some ramen, read a little, and turned in for the night. 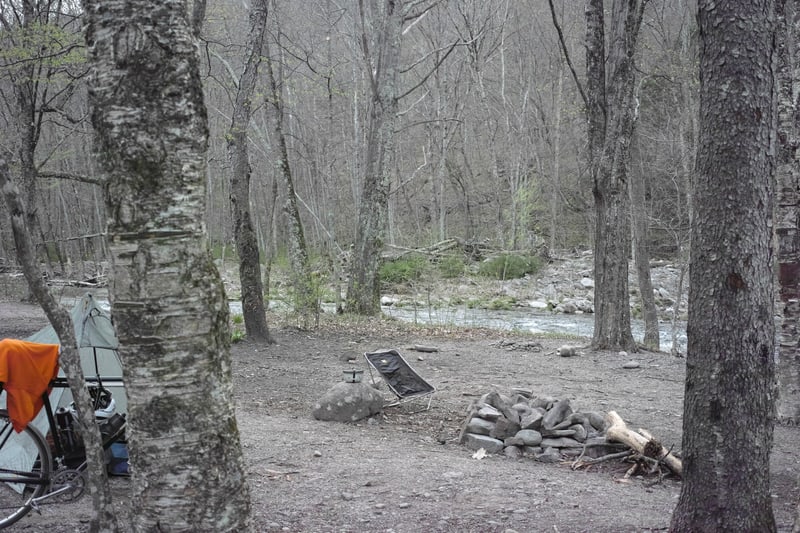 It rained during the night but it stopped before I woke up, though the woods were still foggy and damp. I brewed my tea and lingered too long over Hernan Diaz’s excellent novel In the Distance; eventually I had to put the book down and pack up. 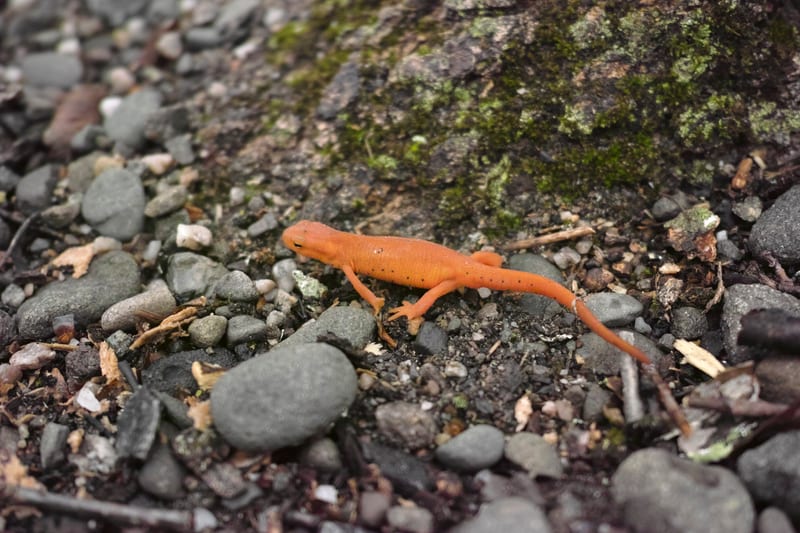 I headed south from the campsite past the Rondout Reservoir on NY-55A to Napanoch and past Eastern and Ulster Correctional Facilities. Eastern has been home to a number of political prisoners, including Jalil Muntaqim and, until April, Herman Bell. 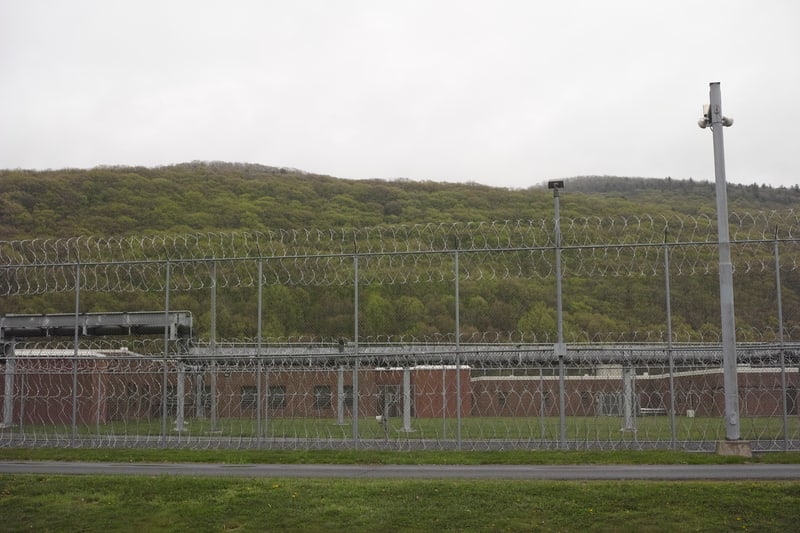 After Napanoch I took the (very scenic) Berme Road into High Falls, where I stopped for a much-needed hot meal at The Last Bite. A tired cyclist couldn’t ask for a better breakfast stop; the food was quick and delicious, the atmosphere unpretentious, and counter service means you can eat quickly and get back on the road–which I did.

The rest of the ride back was uneventful until Poughkeepsie: a long, boring stretch on NY 213, then a few back roads to the Hudson Valley Rail Trail in Highland, which connects to the Walkway over the Hudson. The elevator from the walkway was out of order, so I had to ride further east to the point where the trail is at grade again. And of course it was here–minutes from the train station–that I got my only flat of the trip. It was a pinch flat, courtesy of the parking lot at the trailhead, over which you must ride to exit the trail, and which might as well have been designed to cause flats; it’s dirt with an incredible quantity of very sharp rocks very firmly embedded in the ground. It was a slow enough leak that I was able to pump up the tire and make it to the station without changing a tube. I hadn’t checked the schedule ahead of time. I checked the departures board; the next train was in one minute. Somehow I made it (despite cordoned-off stairs and a slow elevator to the platform). I changed the tube on the train between the Tarrytown and the Harlem-125th St. stops (I waited until this section, where the train runs express and there are long periods between stops, so that I could work in the car’s door area without getting in anyone’s way; it was the only part of the car with enough space to fix the flat.)

I was feeling pretty pleased with my flat-fixing skills when I left Grand Central and headed east on 42nd St. I made it half a block when my chain broke. At home, on my workstand tool shelf, was my chain tool, which I’d debated bringing; it’s a bit heavy and I’d decided to leave it. I’d never broken a chain before and figured I wasn’t a strong enough rider to do so. Needless to say, I won’t make that mistake again; if my chain had failed earlier in the day, in the Catskills, where cell service is almost nonexistent and it can be tens of miles to the nearest gas station, I’d have had a very long walk ahead of me. As it was, I had only to walk seven blocks up and two over, to Kickstand Bicycles on 49th St., where the mechanic was kind enough not to dwell too long on my idiocy while he fitted a new chain and freewheel on his sidewalk work stand. Duly chastened, I made it home to Queens without further incident.